The Jaguar I-Pace’s boot is a good size and has dedicated cable storage, and there’s plenty of space for rear passengers 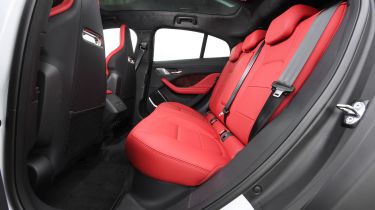 The I-Pace is roughly on a par with the Audi Q5 for interior space and practicality, so a family of four will be well catered for. There’s even a small storage space under the bonnet, or a ‘frunk’. The I-Pace doesn’t have the remarkable space of the Audi e-tron or the versatility of the much bigger Tesla Model X, which is available in five, six or seven-seat layouts.

Headroom won’t be a problem for front- or rear-seat passengers in the I-Pace, and the lack of a transmission tunnel means that a middle passenger has decent legroom, although there’ll still be a shortage of elbow room with three on the rear bench. Three 12V sockets and six USB ports should ensure a family’s clutch of tablets and phones are all charged, and there are handy storage trays under the back seats, too. 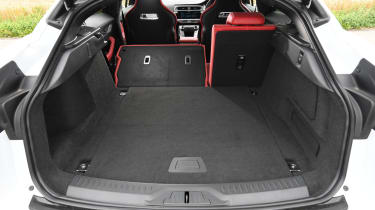 The I-Pace has a claimed 557 litres of boot space, which is a decent capacity on paper, but in practice you’ll get more into the boot of a Q5, let alone the vast boot of a Model X. Still, it’s big enough for a few big suitcases, or a chunky buggy and a big weekly shop, so most families will be well catered for.

Jaguar also offers an official bike carrier, although with the rear seats folded the boot is totally flat, making it easy to slide in a bike or any other long item. A space under the bonnet provides a 27-litre cubby.