The Hyundai Ioniq Hybrid is very efficient compared to a diesel hatchback, but it’s a shame the Toyota Prius manages lower CO2 emissions 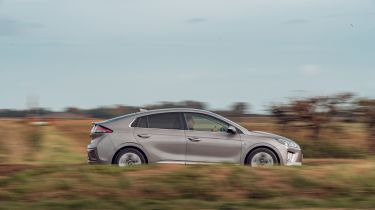 Although the Hybrid is the least efficient member of the three-strong Hyundai Ioniq family, it still does well by combustion-engined standards and doesn't require plugging in to charge its battery. It's also the cheapest of the trio, which goes some way towards the explaining why it's the best-selling version by a big margin.

The Ioniq Hybrid’s official figures of 102-105g/km CO2 emissions and 61-63mpg fuel economy shame most diesel rivals, although it does trail behind the Toyota Prius (94g/km) on emissions. Real-world economy should be impressive, too; you’ll likely manage over 50mpg with ease.

The Ioniq also has something called ‘ECO-DAS’, or 'Eco Driving Assistant System', which helps keep fuel costs as low as possible by calculating the most efficient navigation route, taking traffic into consideration. It even encourages coasting by giving prior warning of changes in speed limits or road conditions.

The Ioniq's CO2 emissions of 102-105g/km are good by diesel-car standards, but the Prius does undercut the Ioniq Hybrid (provided you have the Toyota on 15-inch wheels). Neither gets free access to the London Congestion Charge Zone any more – for that you'll need a pure-electric or plug-in hybrid car.