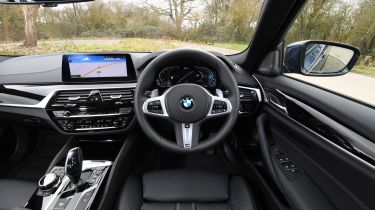 Other than the digital dials, which are tailored to show driving range and battery charge, the 530e has exactly the same dashboard as any other 5 Series.

Comfort is a little compromised as BMW has beefed up the 530e’s suspension to make sure the extra weight is contained, resulting in a slightly lumpier ride, although it’s still not uncomfortable.

Adaptive dampers and adjustable lumbar support are among the key options you should add if you can, to get the best comfort from the 530e.

The 530e’s dashboard is much the same as you’ll find in the rest of the range, other than its digital ‘black panel’ driver readout displays additional information you need from a plug-in hybrid, including the range you’ve got left and the battery charge. Otherwise, everything follows the same well-structured, conventional dashboard layout that BMW has honed over many decades.

One niggle we have is with the infotainment screen that’s fixed to the top of the dash, looking a little like an afterthought despite being the most critical part of the interior after the driver’s dials. Otherwise, the 5 Series’ interior is made of plush-feeling materials, with a combination of textures that look and feel great. Picking one of the lighter upholstery colours also helps to brighten things up.

M Sport adds style pizzazz including 19-inch alloys, an M Sport bodykit and glossy, dark grey exterior trim. You don’t get stiffer M Sport suspension with the 530e as you do with other 5 Series M Sport models; the 530e has its own particular suspension setup that applies to both trims.

You could really go to town with the 530e’s options, with keyless entry, Apple CarPlay, full electric seat adjustment, a reversing camera, split-folding rear seats, fully adaptive headlights, soft close doors… And that’s before you look at metallic paint and a sunroof.

Stick to metallic paint, keyless entry and adjustable lumbar support as the essentials, and you won’t be spending too much on extras to get a rather lavish-feeling 530e. 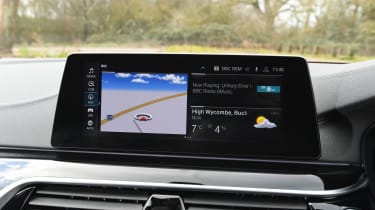 Every 530e comes with BMW’s Professional media system, complete with a 10.25-inch colour touchscreen, sat nav, voice control, Bluetooth, CD player, DAB radio and USB input. You have to pay extra for Apple CarPlay, which is cheeky given how expensive the 5 Series is, and there’s no Android Auto.

Still, the BMW’s system is controlled via a rotary dial or using the touchscreen, and it’s one of the most user-friendly systems going – something that was reflected in the positive response it got in the 2018 Driver Power survey.

You also get BMW ConnectedDrive, which is a service that includes live traffic information and that'll tell the emergency services automatically if you have a crash, passing on your location. Using BMW's 'remote services', owners can check on their car's location and even flash its headlights, lock or unlock its doors or set its ventilation, all using a smartphone app.

Adding the Technology Pack costs a lot, but it adds an excellent head-up display, wi-fi hot spot, wireless charging for your phone and a fancy (if rather large) key that includes a screen to show you whether your car is locked, among other info.

It also includes BMW’s ‘gesture control’, which means you can control the audio volume, skip tracks and do other basic commands by moving your hand in front of the dash. It’s clever technology, but it’s also mostly a gimmick that won’t actually make life on the road easier.