Boot space isn’t enormous for a car of this size, but the Bentley Bentayga Hybrid remains a practical machine 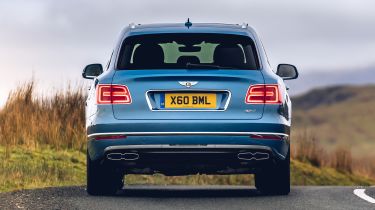 At over five metres long and almost two metres wide, it’d be almost impossible for the Bentley Bentayga Hybrid to be anything other than practical. That said, this is a luxury SUV and the vast swathes of interior space are afforded to passengers in the name of comfort and relaxation: as a result, boot space isn’t as generous as it could be.

The Bentayga Hybrid’s interior feels very special indeed, and while elements of it are beginning to show their age compared to newer luxury vehicles, passengers will feel right at home among the premium wood and leather materials.

There are several storage compartments throughout the Bentayga Hybrid, with a centre-split armrest between the front seats, reasonably sized door bins and, of course, a glovebox. There’s also a space in the centre console in which to lay smartphones while on the move.

The Bentayga Hybrid seats five adults, although the middle-rear passenger will have to make do with less shoulder and legroom. The floor is higher here thanks to the central tunnel that houses the car’s transmission, although it’s wide enough to get both feet on.

For everyone else, legroom and headroom is plentiful – even for the tallest of adults.

Bentley offers a comfort pack that equips the Bentayga Hybrid with four ultra-comfortable seats (replacing the middle-rear seat with a storage console, complete with cup holders), however this is a pricey option at almost £9,000.

At 484 litres, the boot in the Bentayga Hybrid isn’t huge for a car of this size. The smaller and much less expensive Jaguar I-Pace yields 557 litres of luggage capacity, and you have to wonder how many people will be put off by the relative lack of space in the rear.

However, unlike many plug-in hybrids, the Bentayga Hybrid doesn't compromise the amount of boot space available to accommodate its battery: the 484 litres afforded here is the same as you'll get in the non-hybrid variants in the rest of the line-up.

With the seats folded down, boot space increases to 1,774 litres, which is plenty for those occasions when you need to transport large goods around.