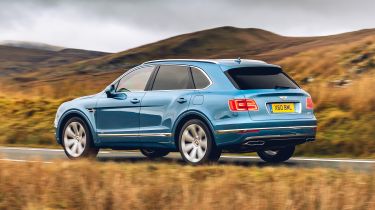 Official figures for the Bentley Bentayga Hybrid stand at 81mpg fuel economy and 79g/km CO2 emissions – much more efficient than the 4.0-litre V8 and 6.0-litre W12 non-hybrid alternatives in the model line-up.

Those cars achieve around 20 and 21.7mpg respectively, so the hybrid is the obvious pick of the range for fuel-conscious buyers. You do need to keep it charged up and make the most of its electric range to come close to the promised numbers, remember.

The Bentley Bentayga Hybrid features a 17.3kWh battery comprised of 168 lithium-ion cells. According to the company, this will return 24 miles of electric range, a less-than-impressive figure that’s almost certainly a result of the car’s two-and-a-half tonne weight.

That said, if you can manage to drop off the kids at school and pop to the shops without using the petrol engine, then the fuel savings are going to add up over time.

On our test run in the Bentayga Hybrid, we managed 40mpg on a journey that started with a three-quarters full battery, a vastly superior figure to the V8 and V12 alternatives. However, we'd expect that figure to drop noticeably on longer motorway runs.

Plugging the Bentayga Hybrid into an everyday, three-pin socket will fully replenish the battery in 7.5 hours, however a home wallbox charger will see this figure cut to two and a half hours.

Even with the former, an overnight charge is perfectly possible, and you’ll be laughing if you only drive limited distances on a day-to-day basis.

It’s worth noting that the Bentayga Hybrid can’t rapid charge, however, so if you’re determined to stick to electric-only running, you’ll need to come to terms with the slow charging rates common among plug-in hybrid vehicles.