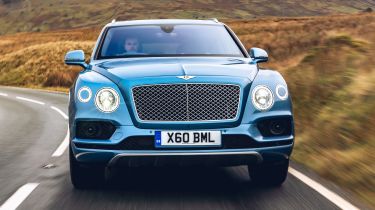 The Bentley Bentayga Hybrid is fast on paper, but in the real world its impressive speed isn’t achieved in the effortless style you’d expect from a luxury vehicle that costs £133,100.

Low speed is where the Bentayga Hybrid performs best, when the electric motor takes charge and delivers the kind of smooth, quiet progress that a car like this should achieve.

Harsher acceleration is where the Bentayga Hybrid falls short of expectations: putting your foot down causes the engine to rev harshly, to the point where it sounds like it’s straining to deliver the performance you’ve asked from it.

In this respect, it’s not quite as accomplished as you might expect given the six-figure price tag, although it’s much more serene at a steady motorway cruise, with the engine becoming muted and settled.

With a 3.0-litre V6 petrol engine capable of 335bhp, and an electric motor good for 126bhp, the Bentayga Hybrid can combine the two to produce a total of 443bhp.

Likewise, combined torque adds up to 700Nm, meaning the car is very quick indeed considering that it tips the scales at two-and-a-half tonnes: 0-62mph takes 5.5 seconds, with a top speed of 158mph.

That said, it's still the slowest Bentayga in the line-up, with the V8 petrol hitting 0-62mph a full second quicker than the Hybrid variant.

One of the best things about the Bentayga Hybrid is the way it handles: despite its vast kerbweight and size, it’s amazingly agile around tight corners, with very little in the way of body lean. Unsurprisingly, it feels very similar to the Porsche Cayenne E-Hybrid, with which the Bentayga shares a platform.

You only really feel the weight of the Bentayga when decelerating hard: the iron brakes have to work hard to keep the bulk of vehicle in check.

One disappointment is the ride quality: the Bentayga copes well overall, although on some broken surfaces the car will judder to the point it can be felt through the seats.

Drivers can tailor the suspension to meet their needs and tastes, with the characteristics changing when flicking through the Bentley, Comfort, Sport and Custom modes. The suspension can also be raised when greater ground clearance is required.