For a saloon, the Volvo S90 Recharge T8 hybrid feels very spacious, with an impressive 500 litres of boot space 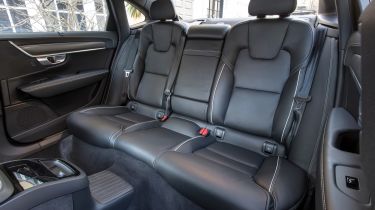 Impressively for a plug-in hybrid, the S90 Recharge T8 offers the same amount of interior and luggage space as its more conventionally powered siblings, with a decent amount of room for front and rear passengers.

The S90 Recharge T8 doesn’t have the same amount of storage options as you might find in an SUV or MPV, but it’s perfectly adequate. Crucially, the batteries don't impinge on interior space, which is the same as in the non-hybrid models.

Up front, a neat cover slides back to reveal two cup-holders, ahead of a large central storage bin. The glovebox and door bins are all of a good size, while the rear armrest folds down and contains two more cup-holders and a storage tray. In the back, there’s a good amount of space for three adults, although the centre seat is best for occasional use only.

On the plus side, the front seats are shaped in a way that maximises knee and legroom for rear-seat passengers, although it can feel a touch claustrophobic without the optional sunroof, and in the R-Design Plus with its dark-coloured seats and headlining.

Remarkably, the S90 Recharge T8 hybrid doesn’t give up any boot space to its batteries, so you get the same 500 litres of luggage capacity as you do in the diesel and petrol versions of the S90. That’s only 60 litres less than the V90 Recharge estate can manage.

The boot in the S90 is smaller than those of the Mercedes E-Class and BMW 5 Series, but larger than what you get in a Lexus ES. In common with most cars in this class, there’s a large load lip before you can access the luggage area, although the boot itself is a good, square shape.

All S90 Recharges models come with a powered bootlid, which can be operated hands-free on the Inscription Plus trim level. You’ll also find a 12-volt socket inside the boot, along with a ski hatch behind the centre armrest so you can carry long items back from the ski run or DIY store.