With a 13kWh battery, the Volkswagen Passat GTE Estate offers up to 34 miles of zero-emissions range 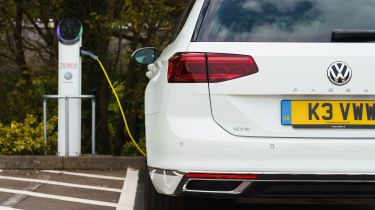 As with any plug-in hybrid, achieving the headline fuel-economy figures in the real world will rely on you charging the car with a cable as often as possible: the more frequently you plug the GTE in, the less frequently you’ll need to visit the petrol station to top up on fuel.

While it’s possible for low-mileage drivers to get by without ever using the engine (in theory), in practice most owners will run out of battery power quite regularly. Once the battery is out of juice, you should expect around 40mpg from the 1.4-litre petrol engine.

The Passat GTE does let you charge the battery on the go, using the engine to generate electricity even when stationary. However, this has a negative effect on fuel economy: charging using the cable will be cheaper and more efficient in the long run.

The latest Passat GTE Estate features a 13kWh battery, delivering a significant improvement in electric range over the old car’s 9.9kWh unit. Officially the GTE will now go for up to 35 miles in zero-emissions mode, although in the real world, 25-30 miles is a more realistic expectation.

As is the case with electric cars, the battery’s performance is at the mercy of temperature changes, especially in cold weather. We tested the car on a mix of suburban roads and motorways on a chilly morning and the digital read-out promised just 22 miles of zero-emissions range, a long way shy of the official figure.

That said, the gauge was true to its word, delivering the 22 miles shown despite most of the journey taking place on 70mph roads; something which ordinarily ruins efficiency during electric running.

As the battery only stores 13kWh (fully fledged electric cars are powered by much larger units), charging the Passat GTE is a doddle. Plugging into a typical three-pin socket will see a full charge delivered in around five hours 40 minutes, which is more than fast enough if you can leave the vehicle plugged in overnight.

The maximum charge the GTE will accept is 3.6kW: home wallbox chargers operating at this speed will fully replenish the battery in around three-and-a-half hours.