The battery eats into the boot space in the Volkswagen Passat GTE Estate, making it less practical than the non-hybrid models 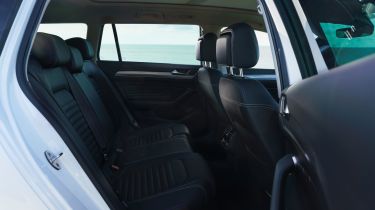 There are two ways of looking at the Passat GTE Estate: either you can view it as a large, practical family car that has plenty of space for its passengers and their luggage, or you can see it as large, family car that’s not quite as practical as it should be.

The Volvo V60 T8 – one the GTE Estate’s main plug-in hybrid rivals – has a much bigger boot despite being shorter, narrower and less tall. GTE buyers also have to contend with the fact that the boot loses 167 litres of space compared to its non-hybrid petrol and diesel siblings, due to the placement of the PHEV car’s 13kWh battery.

Inside, passengers will find plenty of space regardless of where they’re sat: the Passat Estate is set up to accommodate five people, although the fifth passenger in the middle rear seat may not fancy the prospect of a long journey due to the lack of shoulder and foot room. Elsewhere, though, legroom and headroom is plentiful, and the seats themselves are perfectly comfortable.

In terms of storage, you get all the usual cubbyholes in the form of doorbins, a glovebox, drinks holders in the centre console and a small storage box behind those. There’s a container for sunglasses next to the lights in the cabin ceiling, and a spot to store wallets or smartphones under the climate-control interface on the dashboard. 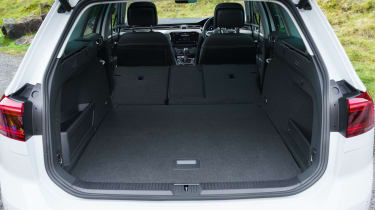 The Passat's boot measures 483 litres with the rear seats in their upright position, which is more than enough to swallow a couple of suitcases and any other gear that might be thrown in for a holiday or weekend break. There’s no load lip and the floor is flat, while the floor can be lifted up to reveal an underfloor storage compartment: most people will use this to keep the car’s charging cables, but it’s useful nonetheless.

There’s no parcel shelf, although the load cover can be retracted in stages if owners so wish, and boxes in the gaps behind the wheelarches make for useful spaces to store small odd ends. The seats can be folded down from behind the tailgate, too, thanks to a pair of spring-loaded release flaps.