The standard Vauxhall Grandland X has a five-star Euro NCAP crash-test rating, making it one of the safest cars on the road 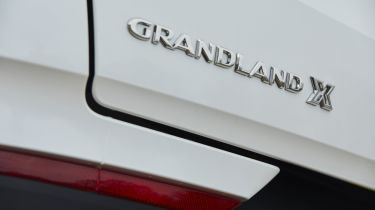 While the hybrid Vauxhall Grandland X hasn't been specifically crash-tested by Euro NCAP, the conventional petrol and diesel version has – securing the full five stars when it was assessed back in 2017.

This is thanks in part to the fact that every Grandland X gets Vauxhall’s Safety Pack, which features forward collision alert, autonomous emergency braking, lane-keeping assistance and a driver drowsiness detection system. In addition this pack also adds keyless entry, high-beam assistance and rear parking sensors.

The Vauxhall Grandland X is a popular sight on UK roads – at least in non-electrified form – but only managed a 69th-place finish in our sister title Auto Express' 2020 Driver Power owner satisfaction survey. This didn't take the plug-in model into account, but still doesn't bode that well. Of those surveyed, 21.7% of owners reported experiencing a fault with their Grandland X – but we are yet to find out how the plug-in version fares.

That said, the Peugeot 3008 with which the Vauxhall shares many parts came an impressive 2nd place overall. The plug-in version of that car is worth considering alongside the Grandland X.

The Peugeot scored well in every category, especially when it came to comfort, practicality and connectivity. Its weaker scores were for fuel economy and running costs, although this was calculated before either model had a hybrid in the range, so we expect to see this rating creep up over time.

Euro NCAP awarded the petrol and diesel Vauxhall Grandland X a five-star rating when it crash-tested the car back in 2017. There's little reason to believe that the hybrid version would perform any differently in the event of an accident.

The Grandland X was given a score of 84% for adult occupant protection, and an even higher 87% for child occupant protection. Things weren’t quite as impressive in the pedestrian protection (63%) and safety assistance (60%) categories, yet neither prevented the family SUV from achieving the coveted five-star overall rating.