The Toyota RAV4 Hybrid is a comfortable, practical and well equipped family SUV, but it struggles to compete with plug-in rivals 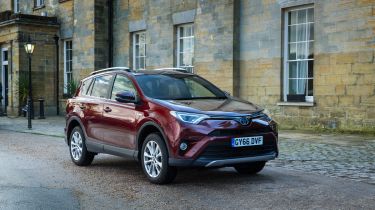 The Toyota RAV4 name has been around for over 20 years, but the latest generation is the first to offer hybrid version. In a market increasingly dominated by plug-in hybrids, though, the RAV4 struggles to compete.

As a hybrid SUV, the RAV4 falls between two stools, being ill-equipped to compare directly with the Mitsubishi Outlander PHEV or MINI Countryman Cooper S E ALL4, while being bigger and more expensive than the Kia Niro. However, its electrified power system also makes it more expensive than non-hybrid rivals like the Honda CR-V and Ford Kuga. So, where exactly does the RAV4 score?

In truth, the RAV4 hybrid's main rival is the conventional petrol RAV4. As the hybrid shares its 2.5-litre 195bhp electrified engine with the more expensive Lexus NX, it's considerably faster than the 2.0-litre petrol model, while boasting a better claimed fuel-economy figure. The latter might be tricky to realise if you don't make a lot of urban journeys, which is where a hybrid system really comes into its own.

As well as the quietness afforded by all-electric power during slow portions of an urban commute, the hybrid's extra thrust helps when joining fast-flowing traffic on motorways. It's a shame, then, that the RAV4 feels so hamstrung by the CVT gearbox that all Toyota hybrids use. When you make full use of the engine's power, the revs soar and are held until the desired speed is reached, which is a far noisier experience than provided by a regular automatic gearbox.

While no RAV4 rates highly as a car for enthusiastic drivers – the steering is light and vague with no real feedback, and the body leans pronouncedly in fast corners – the extra weight of the batteries and electric motor further blunt the hybrid's responses. Stiffer suspension is required to deal with that weight, too, which means a firmer ride than offered by the petrol models. It's most keenly felt over low-speed urban potholes, which is an unfortunate contrast with the quietness you can enjoy when travelling in EV mode.

At the top end of the range, the leather-lined Excel is quite luxurious, but we reckon the entry-level Icon offers the best value. Some may find the Icon Tech's standard sat nav worth the extra money, however. Whichever version you choose, though, there's spacious seating for five with reclining seats in the rear and a 501-litre boot. 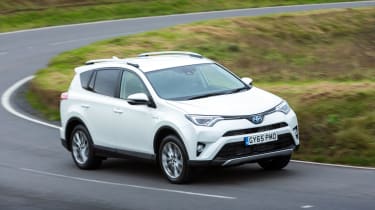 Many will be attracted by Toyota's enviable reputation for reliability, although our annual Driver Power satisfaction survey shows that owners aren't all delighted by their cars – Toyota finished in 12th place out of 26 manufacturers in 2018, and the RAV4 itself came 51st out of 75 cars in the survey. There's the reassurance of a five-year/100,000-mile warranty, though.

Nevertheless, the Toyota RAV4 is beaten on points by more up-to-date conventionally powered SUV rivals like the Ford Kuga, Peugeot 3008 and SEAT Ateca, and plug-in hybrid rivals are likely to prove less expensive to run. Were the RAV4 a plug in model, and better able to compete on fuel consumption and tax liability, it would be an easier car to recommend.

If you're keen on the Toyota brand and aren't concerned about practicality, the Toyota C-HR hybrid is more enjoyable to drive and has far stronger predicted residual values, while maintaining a stylish SUV look.

For a more detailed look at the Toyota RAV4 hybrid, read on for the rest of our in-depth review.