The all-wheel-drive Subaru Forester e-Boxer hybrid is great off-road and comfortable on-road, but still hard to justify at this price

Subaru has a reputation for building rugged 4x4s, but off-road ability often goes hand-in-hand with poor fuel economy. That’s something the manufacturer has attempted to address with its latest hybrid Forester. This 'e-Boxer' powertrain is now the only engine option offered in the Forester, where previously diesel was the order of the day. And while this latest model, introduced in November 2019, looks similar to the previous one, it's based on the same platform as the latest Impreza hatchback and Levorg estate, so it's all change under the metal. Look closer and you’ll see various updates to the exterior design: the front end has a sharper, more angular appearance with a more upright grille. There are also bigger windows, a flatter rear end and the tail-lights have been heavily reworked, with contrasting black trim introduced to the area above the number plate. The current model is longer and wider than its predecessor, which has allowed space inside to be increased, ensuring lots of knee and shoulder room for all. Headroom in the rear is still a little tight, although the boot – accessed by a powered tailgate on Premium-spec cars – measures a generous 1,779 litres when the seats are down. The interior takes a step forward with a more premium-looking design than before. It’s now classy enough to compete with the cabin of the Toyota RAV4 and certainly betters that of the Mitsubishi Outlander PHEV. Everything seems robustly put together, including the colour touchscreen that sits in the centre console, under a second digital display on top of the dashboard. The steering wheel houses several buttons to make functions easier to control on the move and leather trim raises the ambience further. 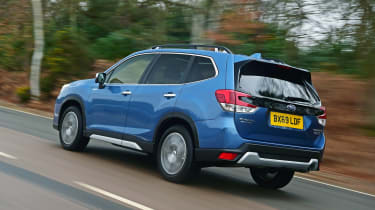 The Forester e-Boxer has all-wheel drive and Subaru refers to the hybrid system as ‘self-charging’ – the same way Toyota and Lexus describe their hybrids. Pure electric range is very limited, and there’s no ‘EV mode’ button to force the car to use what little zero-emissions capability it has. Instead, the electric motor mostly runs in conjunction with the engine to improve acceleration and make the car more fuel-efficient. On the whole, the setup works well, with the car managing the hybrid system automatically. The engine cuts in and out periodically, with the transition fairly smooth from the driver’s point of view, although there's an occasional hesitation that you don’t get in comparable Toyota and Lexus hybrid systems. On the move, the Forester e-Boxer is very quiet provided you don’t accelerate hard, when the CVT automatic gearbox can have the boxer engine groaning loudly with little performance to show for it. The Forester isn't fast, and you’ll notice that as you work to gather speed to merge onto a motorway, but otherwise performance is perfectly adequate for the car's expected purposes. Handling has been improved compared to the old car, although it still feels fairly ‘old-school’, with noticeable body lean in corners and slow steering that’s nonetheless light and predictable. Nothing about the Forester feels exciting, but it's very comfortable, relaxing and surefooted on seemingly any terrain. And it’s seemingly any terrain where it really proves its colours as one of the finest off-roaders available at this price. Only offerings from Land Rover and Jeep better it for significant off-road prowess over the sort of rutted lanes and soggy fields that the Subaru’s often agricultural habitat throws up.

Two standard terrain modes and hill-descent control, matched with permanent four-wheel drive is a hard system to fault, even if the hybrid powertrain does sometimes feel indecisive as to which power method to choose on steep inclines and the like. Standard equipment includes automatic LED lights, alloy wheels, heated seats and air-conditioning. The entry-level XE version misses out on sat nav, but every car at least offers smartphone connectivity with Apple CarPlay and Android Auto. Safety is strong, too, with a five-star rating from Euro NCAP in 2019. Overall, the Forester is a very likeable car, precisely because of its unashamed function-first approach. It still has a whiff of estate rather than SUV to its boxy looks and it prioritises comfort and visibility over style, but it’s stacked with equipment. But the numbers don’t stack up. It’s too expensive to buy – and finance costs are also high by class standards. It isn’t economical by any measure, with our fairly sedate road route returning just 33mpg, and its CO2 emissions make it expensive for company-car users. The hybrid system is fine in itself, but it’s fine because it’s easy to ignore rather than because it’s in any way fun or potent. It's not even notably good for towing, since the maximum braked towing capacity is 1,870kg, which most diesel rivals will better. We'd want more time on electric running, and a dedicated EV mode, to make the most of it. So, despite being a genuinely likeable and honest car, the Subaru Forester hybrid is also a very niche proposition. Unless you really do own a farm and need the off-road ability and great reliability above all else, when you factor in purchase and running costs, on-road performance, handling and more, the Forester is very difficult to justify in a class of more broadly talented rivals.

For a more detailed look at the Subaru Forester hybrid, read on for the rest of our in-depth review.