The hybrid Megane estate has the typically low running costs of a plug-in hybrid, but it's not class-leading in this respect 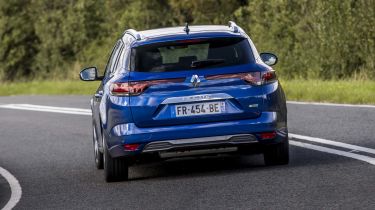 The Renault Megane E-TECH hybrid follows a very familiar formula for plug-in hybrid cars. It has an efficient 1.6-litre petrol engine combined with an electric motor and a small battery. You can drive on electric power alone, but only for a limited time before you need to charge up again.

The Megane features a 9.8kWh battery, which allows for a 30-mile all-electric range. This is average for a plug-in hybrid, and we’d expect to see closer to 20 miles in winter unless you have a very careful driving style.

You'll probably never see the claimed 217mpg fuel economy, as you'll either not be using the engine at all, in which case the engine won’t even be on, or you’ll be driving on a longer trip using the engine and getting fairly unremarkable economy around the 40mpg mark.

The Megane has a small battery so it doesn’t take all that long to charge up, even though it’s limited to a 3.6kW charging speed. That means those ultra-fast public chargers aren’t very useful, but you won’t need to visit them either, since you have an engine on board)

From a three-pin socket, a full charge takes four and a half hours, and that’s cut to three hours if you use the free home wallbox that comes with the car. Public chargers will take the same amount of time to do the job, because of the above-mentioned charging-speed limitation.