The Clio hybrid is pleasingly spacious for a supermini, with plenty of room for both passengers and luggage 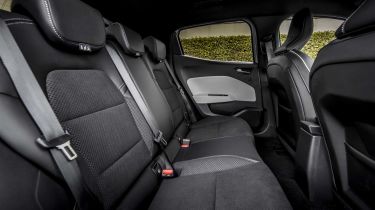 The Clio is only offered as a five-door hatchback, and it’s worth considering over bigger hybrid family cars like the Toyota Corolla if you think you can live with its size. The Renault still has enough space for a couple of younger children to be comfortable in the back, even on long journeys.

The Clio’s curved roofline doesn't impede too severely on rear headroom, but the large window pillars can make the back feel slightly claustrophobic. Renault has tried to alleviate this by making the front headrests smaller to boost forward visibility, and the front seats have been carefully sculpted to boost kneeroom in the back. We found it comfortable up front, but still a little tight for adults in the rear.

At 300 litres, the Clio E-TECH's boot capacity is a bit less than the 391 litres of its purely petrol equivalent. It's still a reasonable size for a single buggy, although the load lip is fairly high and there’s a big drop over to the boot floor, so it’s not the most practical boot for routinely loading heavy stuff into. Dropping the rear seats sees 1,146 litres freed up for bigger loads.