Neither C 300 hybrid is a slouch and both handle well; the diesel-electric version in particular has buckets of torque 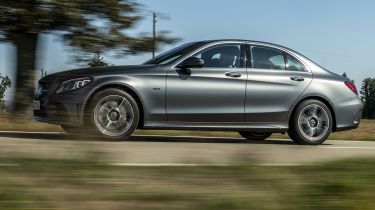 At time of writing, we've only sampled the C 300 de diesel-electric version of this car. As it goes, that's no bad thing; the two power sources work well together and offer an interesting alternative to the petrol-electric mainstream. We'll add driving impressions of the C 300 e when we get behind the wheel in due course.

The car's four-cylinder diesel engine and electric motor together make a punchy 302bhp, resulting in a hot-hatchback-rivalling 0-62mph time of 5.6 seconds and a top speed of 155mph. In electric mode, the C 300 de can travel at up to 80mph and should keep going for up to 35 miles before you need to charge.

Driving around town in pure-electric mode is a serene, relaxing experience for the most part, although it can take a bit of practice to pull away from traffic lights smoothly given the electric motor's instant power delivery. Progress is near-silent, with just a faint hint of motor and transmission whine to remind you of how the car is powered. Pressing the accelerator harder brings the diesel engine to life. While it's a long way off the clattery diesels of old, it's obviously noticeable on start-up, but quietens down very nicely once you're at a steady cruise.

On the move, the C-Class hybrid helps you to get the best possible fuel-efficiency by suggesting when to lift off the throttle, factoring in an imminent change of speed limit or downhill stretch of road. When it comes to handling, a regular non-hybrid C-Class does feel a bit sharper and quicker than the C 300 de, which is an unavoidable consequence of the weight added by the hybrid system.

The addition of an electric motor helps take the strain off the car's diesel engine while also filling gaps in its power delivery. A welcome side-effect of this is that the C 300 de is quieter as it goes about its business, improving refinement in an already refined car. If the battery goes flat, however, this feeling disappears as the car works harder to deal with the extra weight of battery and electric motor.

It's not intended as a sporty car, but the C 300 de is fast by anyone's standards. With 302bhp and a formidable 700Nm of torque on tap, the resulting 0-62mph sprint time of 5.6 seconds isn't surprising. There's plenty of shove available at all speeds and the car feels pretty effortless on the motorway – especially with a fully charged battery.

The car's smooth performance is dealt with by a nine-speed automatic gearbox that shifts slickly and responds well to throttle inputs. Things can be a little jerky when switching from one power source to another, but this is only really noticeable when the battery has run flat.

While not really intended as a sporty offering in the same way its BMW rival is, the C 300 de is good to drive. The car is over 300kg heavier than a standard diesel C-Class and this is noticeable in corners; it feels a little less sprightly than its lighter siblings, but is still a good-handling car in isolation.

The car's suspension is largely comfortable and well controlled, although certain rougher road surfaces can result in some unwelcome movement. In fact, the extra weight helps to level out what can be a more unpleasant feeling in non-hybrid C-Class models.