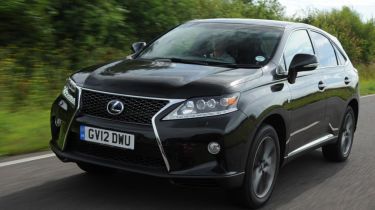 The original 1997 Toyota Prius was the first hybrid car to go on sale in the UK, and since then the brand and its upmarket subsidiary Lexus have released numerous petrol-electric models, constantly developing the technology.

The Lexus RX SUV has been available with a hybrid powertrain since its second generation, when the RX 400h model was offered alongside the purely petrol RX 350. In 2009, this third-generation version launched with hybrid power only. It packs a 3.5-litre V6 petrol engine and an electric motor to give limited zero-emissions running for short distances and at low speeds.

Lexus didn't sell a huge amount of these RXs, so you may struggle to find one used, but if you can, it can make a very good buy, with prices of the earliest examples now down around the £10,000 mark.

Lexus launched the third-generation RX, available only with the RX 450h hybrid engine, in July of 2009. A five-door body and CVT gearbox were standard issue across the range, which initially comprised SE, SE-I, SE-L and SE-L Premium trim levels.

In January 2011, the SE-I Lifestyle joined the range, offering roof rails, underbody protection, a boot liner and a rear bumper protector – aimed at those who frequently engaged in outdoor sports and activities. In May 2012, the RX was facelifted and the F Sport trim level was added, bringing styling enhancements and stiffer suspension.

November 2013 saw the introduction of Advance trim, with LED headlights, 19-inch alloys a Mark Levinson audio system, DVD player and the choice of either a fixed panoramic roof or an opening sunroof.

Lexus offered self-levelling air suspension as an optional extra and it's worth seeking out a car with this fitted if you value ride comfort and smoothness over agility.

The original Porsche Cayenne Hybrid, sold from 2010-2014, is perhaps the most obvious rival for the RX, but it starts at almost twice the price used. It's definitely one for keen drivers, with more of an emphasis on handling compared to the Lexus.

There's also an ultra-rare Volkswagen Touareg Hybrid of the same era, but it's practically impossible to find one, as so few were sold. Conventional large premium SUVs such as the BMW X5, Audi Q7, Jeep Grand Cherokee and Range Rover Sport are all likely to be considered by buyers as well, of course. 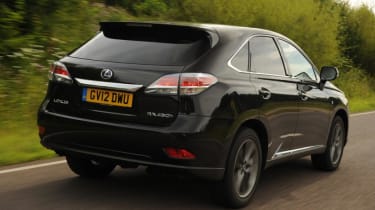 Transmission: CVT (continuously variable transmission) is your only gearbox option for the RX; it tends to suit relaxed rather than aggressive driving style.

4WD: Power goes to all four wheels, but the RX isn't a Land Rover Defender-esque mud-plugger. It is a strong tow vehicle, though, capable of hauling up to 2,000kg.

Ride quality: Cars without the optional air suspension and with larger alloy wheels ride quite harshly and can be uncomfortable on long journeys.

Material quality inside the RX is good, but the dashboard design is looking a bit dated these days. It's spacious, though, and there's lots to keep gadget fans happy. Five adults can travel in comfort and there's plenty of storage space, as well as a 446-litre boot. Drop the 40:20:40 split rear seats down, and that grows to 1,760 litres.

A service is required every 10,000 miles or once a year, whichever comes up first. Once an RX reaches five years old, minor (£235) services alternate with major (£435) ones.

A chain-driven engine means no cambelt replacement needs to be scheduled, but if the hybrid battery fails, you're looking at over £2,000 to replace it. By carrying out a £59 battery health check at a Lexus dealer, you can guarantee it for a year, and you can keep extending this until the car is 15 years old.

Lexus typically makes dependable cars and this is evidenced by the fact that only one recall has been issued for this generation of RX thus far. It applies to cars built between November 2015 and June 2016, covering 691 examples of the Toyota Prius and Lexus RX. The passenger airbag of these cars could in some circumstances fail to deploy; a new airbag was fitted to rectify the problem. 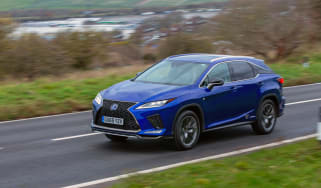