The Lexus NX isn’t a thrill-a-minute to drive, but it’s a refined and relaxed cruiser 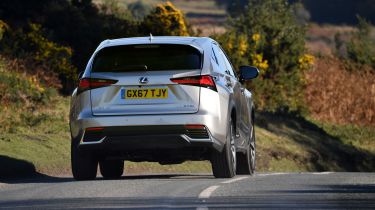 The CVT gearbox is the biggest thorn in the Lexus NX's side, as it makes the engine sound strained and feel lethargic when you need to accelerate. When you don’t need to, the comfortable ride and refined performance are satisfying enough.

The Lexus NX 300h has a 2.5-litre four-cylinder engine that works in harmony with electric motors to drive the car as efficiently as possible. Four-wheel drive is standard across the range, with the exception of the entry-level model, which offers the option of front-wheel drive for lower running costs.

The NX 300h knocks off the benchmark 0-62mph sprint in 9.2 seconds on its way to a 112mph maximum speed. Neither figure is earth-shattering and the bigger battery packs and motors of newer plug-in hybrids tend to provide more scintillating performance.

While the engine and gearbox are very smooth in normal usage, the characteristics of the powertrain under acceleration are less impressive. The CVT makes the engine rev noisily before it starts to accelerate, and there’s a lack of initial responsiveness that’s frustrating.

It’s also an issue when you’re driving up hill or overtaking, when the engine’s drone is intrusive and out of character with the otherwise luxurious feel of the car. Around town, it’s a different story, especially when you’re in electric mode which is almost silent.

The ride and handling of the NX 300h by and large live up to its luxurious image, although it’s not a match for latest SUV rivals. The ride is comfortable most of the time, but around town the suspension feels a bit firm and transmits too many road imperfections.

At higher speeds, the ride feels more refined and comfortable, but it still crashes into potholes that wouldn’t make most of its rivals flinch. While the NX doesn’t lean too much in corners, you get nowhere near the same feeling of agility and poise that a BMW X3 would deliver. The Lexus' steering feels lifeless, too, which adds to the unexceptional drive quality.