Super seats, plenty of space and lots of toys make the Lexus NX 300h a pleasure to sit in 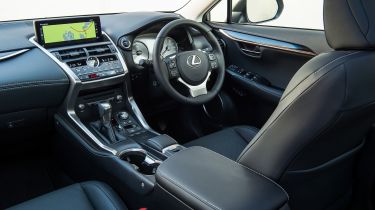 The NX 300h has an angular, futuristic-looking interior that matches the car's exterior looks. It’s also very well equipped with an up-to-date infotainment system and high-quality stereo, while the fit and finish of materials is impeccable.

You sit high up in the NX, as is typical for an SUV, and there’s plenty of adjustment in the electrically-adjusted seat and steering wheel for drivers of all shapes and sizes. The wheel itself is a grippy leather three-spoke design, with the usual controls for infotainment settings, and you look through the top half at a traditional twin-dial instrument pack.

The centre console picks up some of the exterior angles and looks slick and upmarket with its mixture of hi-tech controls, an analogue clock and chrome and leather trim. It’s not as ergonomically efficient as some German rivals, and some of the switches and materials look a bit dated by comparison to more modern alternatives like the Audi Q5, but it does feel very luxurious and the seats are very comfortable.

All versions of the Lexus NX are well equipped, so whichever you choose, you won't be short of options. The entry-level car gets 18-inch alloys, the Lexus Safety System+ pack of safety kit including parking sensors with active braking, heated front seats with Tahara upholstery (man-made leather) and eight-inch sat-nav. The sat nav can be upgraded to a 10.3-inch screen as an option.

Option packs include the Takumi Pack, which adds much of the Takumi trim level's equipment to the F Sport. It comprises adaptive variable suspension, the Mark Levinson stereo, 360-degree camera, head-up display and a panoramic roof or normal sunroof. The panoramic roof is available separately, too. 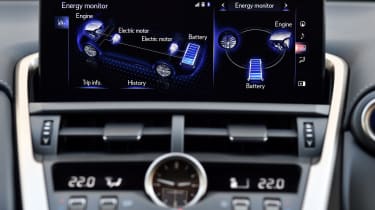 The optional 10.3-inch infotainment screen in the NX 300h looks the part, but it’s not nearly as nice in operation as rivals from BMW or Audi. It’s controlled by a touchpad on the centre console, which is frustratingly awkward to use, and the menus and graphics on the system itself can be confusing, too.

Even programming the sat nav is an annoyingly complicated process.  Still, at least you get Bluetooth connectivity and wireless charging. Plus, recent updates added Apple CarPlay and Android Auto, which means you can bypass most of the dated Lexus interface entirely. It’s a welcome addition that boosts the NX’s infotainment quite a bit.