The Discovery Sport P300e's emissions, economy and electric range are all good, while it's one of the few plug-in hybrids that can rapid charge 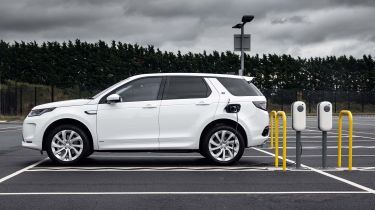 * manufacturer estimates ahead of official testing

On paper, the Discovery Sport P300e hybrid has some very impressive numbers for fuel economy, CO2 emissions and electric range. At the time of writing, Land Rover had yet to complete the official WLTP testing procedure to verify all the figures for the Discovery Sport, so we only have its own estimates for now. You won't be able to place an order for a Discovery Sport hybrid until this testing has been completed.

The average electric range of plug-in hybrids like the Discovery Sport P300e is improving all the time; not that long ago, cars in this class were doing well to return between 15 and 20 miles of zero-emissions driving on a full charge. According to Land Rover's estimate of how it'll fare in official testing, the Discovery Sport hybrid will be able to cover up to 38 miles before the petrol engine has to kick in.

Estimated CO2 emissions range from 36 to 44g/km, but in all cases that's sufficient to get the car into the 10% band for Benefit-in-Kind (BiK) company-car tax, while estimated fuel economy for the plug-in Discovery Sport ranges from 143 to 176mpg. That's under ideal conditions, starting every journey with a full battery, so most people are unlikely to hit such figures on a regular basis in real-world driving.

The Discovery Sport P300e hybrid's 12.2kWh battery can be easily charged up from a standard domestic socket overnight, taking just under seven hours to replenish fully. Installing a home wallbox can reduce that time considerably, to around two hours, while 50kW rapid-charging capability means 30-minute top-ups from 10 to 80% using public charging stations is possible – something that hardly any other premium plug-in hybrid can do.