The Discovery Sport P300e hybrid isn't the lightest or sportiest SUV, but acceleration is swift and it doesn't lean too much in corners 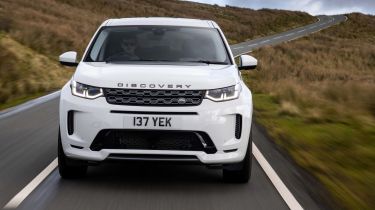 At first glance, a three-cylinder, 1.5-litre petrol engine doesn't seem sufficient for a large family SUV such as this, but the 'P300e' drivetrain of the hybrid Discovery Sport has both a turbocharger and electric motor to assist its efforts, so there's no fear of the car feeling underpowered.

Instant torque from the electric motor means it's more than capable of keeping up with urban traffic without having to call on the petrol engine at all, which is good news for running costs, as you may not have to use any petrol at all until you venture out onto the motorway.

When you do, and the petrol engine has to kick in, you'll barely notice it, as the transition from one power source to another is very smooth and well managed in the Discovery – it's better in this regard than its close rival the Volvo XC40 Recharge, which can feel a bit abrupt and clunky moving from electric to petrol power.

Our one criticism in this area is that once the engine is up and running, its noise is more apparent in the Discovery Sport than it is in the closely related Range Rover Evoque PHEV. This may just be down to the presence of more sound-deadening material in the more expensive and ostensibly more luxurious Range Rover. Fortunately, an accomplished eight-speed automatic gearbox means you never have to rev the engine too hard to make good progress.

Top speed for the Discovery Sport P300e hybrid is 130mph where permitted, while the 'boost' from the electric motor at low speeds ensures the 0-62mph sprint is completed in a relatively swift 6.6 seconds, despite the added weight of the batteries.

A tall SUV like the Discovery Sport is always going to suffer some degree of body roll in corners, but the car controls it well, and standard four-wheel-drive in the hybrid version means it never feels in danger of running out of grip, so it's confidence-inspiring for the driver. The steering isn't as quick as a BMW X3's, but still nicely precise, so there's satisfaction to be had threading the P300e down a twisty country road.