Boot space and cabin storage are decent, but the Discovery Sport P300e hybrid cannot be specified with seven seats 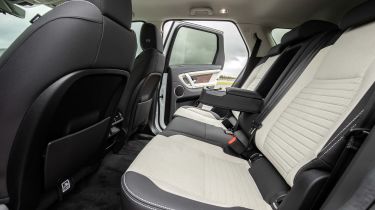 The main practicality drawback of the Discovery Sport P300e hybrid is that it's strictly a five-seater. The ability to specify a seven-seat layout is one of the big selling points of the petrol and diesel-engined Discovery Sport, but the need to fit the hybrid model's batteries somewhere rules this out. In other respects, though, the Discovery Sport PHEV remains a useful and versatile companion for family motoring, with boot capacity barely changed from the standard version.

As in the regular diesel and petrol-engined Discovery Sport, there's fundamentally good head and legroom for front and rear-seat passengers in the hybrid version of the car, so as long as seven seats aren't vital for your needs, the P300e should be more than capable of fulfilling the family-car role with ease.

Interior storage is good, too; the use of an electronic handbrake frees up space in the transmission tunnel for a pair of lidded storage boxes, while there’s a neat trinket tray set into the dashboard ahead of the front-seat passenger. Elsewhere in the cabin there’s plenty of useful storage, numerous cup holders and up to five USB sockets – so everyone can charge their smartphones or other electronic devices at once.

Land Rover has always insisted on measuring its cars' boot capacities right to the roofline, rather than the windowline, as is common practice for most other car brands. For that reason, the Discovery Sport's official numbers of 963 litres with the rear seats in place and 1,574 litres with them lowered paint a somewhat misleading picture when compared to those of rivals. They are, however, only slightly less than the equivalent numbers of 981 litres and 1,698 litres for the diesel and petrol Discovery Sport.