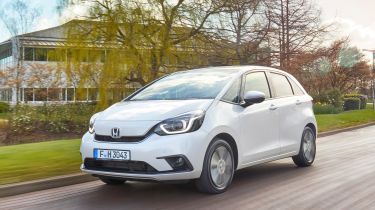 UK prices for the all-new Honda Jazz hybrid have been revealed. The hybrid-only small car costs from £18,980 in SE spec, with the top-spec EX priced at £21,380. It'll also be offered in jacked-up Crosstar guise, commanding a premium of around £2,200 on high-trim cars. Order books are open now, with first deliveries expected in mid-2020.

Specs for the new Jazz hybrid haven't been revealed, but Honda says it'll be offered in a range of colours; the only no-cost colour will be Crystal Black. The Crosstar will be "available exclusively in two-tone combinations, with a gloss-black roof contrasting the expressive colour palettes".

The new Jazz boasts Honda's latest 'e:HEV' hybrid powertrain, which combines a 1.5-litre petrol engine with a pair of electric motors, drawing power from a lithium-ion battery. It'll be the only engine offered for the car in European markets; Honda says this is a step on the road to it offering an electrified version of its entire line-up by 2022.

A power output of 108bhp, 102g/km CO2 emissions and 62mpg are the headline figures, which compare with 114bhp and estimated numbers of 86g/km and 105mpg for the Jazz's closest rival, the new Toyota Yaris Hybrid. The Jazz Crosstar variant records 110g/km CO2 emissions and 59mpg economy. Performance-wise, the Jazz will get from 0-62mph in 9.4 seconds and top out at 108mph. 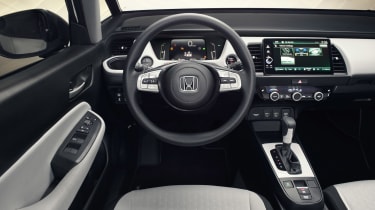 Inside, the new Jazz will feature the latest infotainment and connectivity technology, with in-car wi-fi and an LCD touchscreen with a smartphone-like interface that Honda promises will be faster to use than its predecessor, along with Apple CarPlay and Android Auto smartphone pairing. Voice control will be possible using the Honda Personal Assistant interface first seen in the pure-electric Honda e city car.

On the practicality side, the new Jazz retains the previous model's characteristic 'magic seats', with bases that flip up to free up more cargo-carrying space in the cabin. A wide centre-console armrest and improved, wider seats also promise to increase comfort for occupants. Honda says boot capacity ranges from 298 litres with the rear seats in place to 1,203 litres (measured to the roof) when they're folded down.

Honda is promising excellent comfort from the Jazz, thanks to seats with a "supportive mat structure", instead of the S-spring design used previously. This allows for a 30mm deeper seat than before, while Honda has added extra cushioning. The back of the seat has also been improved to increase lumbar and pelvic support.

In April 2020, Honda revealed that the new Jazz will feature some new safety equipment. A new centre airbag sits in the back of the driver’s seat and, when inflated in the case of a side-on accident, helps to keep the driver and passenger from colliding. This new airbag – likely to feature on other Honda vehicles in the future – is one of 10 fitted as standard to the new Jazz. Seatbelt pre-tensioners also help to stop lateral movement in such a crash, as does a higher centre armrest.

Rear side airbags named ‘i-side’ by Honda help to keep rear passengers from hitting the C-pillar or rear door in a side-on collision. Honda says it has designed the airbag to fit in the rear seat pad and not to impinge on the functioning of its trademark ‘magic’ folding seats. Front knee airbags also feature.

Elsewhere, Honda claims that the Jazz’s structure has been developed to distribute the energy of a crash more evenly.

A host of active safety and driver-assistance features are included as standard. Grouped together in a package called Honda SENSING, the systems on board include automatic emergency braking, adaptive cruise control, lane-keeping assistance, traffic-sign recognition and blind-spot monitoring, among others. 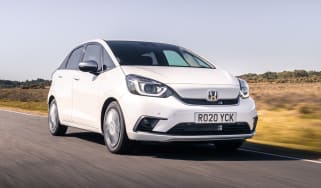