Rapid, fast or slow? We need a whole new language for the electric car

It's not only the number and speed of chargers that we should be thinking about; Vicky Parrott also wants an overhaul of the the language that we use to describe them.

There are many improvements and changes to be made if the UK is to fully support the growing electric-car market, of course. While charging infrastructure and purchase costs are covered exhaustively, there’s also the question of having a clear, universal language to communicate the essential information. I’m not talking about the nightmarish kaleidoscope of various metric and imperial numerical denominators involved in a car’s power output, efficiency and more. That has been a centuries-long headache with vehicles of every sort, and I may as well ask for the sun to rise in the west as expect that to change for electric vehicles. Nope, the most important electric-car language issue that we need to sort out is that of charging speeds.

Currently, there’s an unwritten understanding that a 'slow charger' is your bog-standard domestic socket, which will take 24 hours or more to charge the average electric car. Slow, for sure. In fact, some manufacturers only refer to this as 'emergency' charging. What's misleading is that any charger quicker than that is dubbed a fast charger. So even a 3.6kW charger (which includes some home wallboxes and many of the free destination chargers in supermarkets and the like) is technically a fast charger, according to the utilities industry. Given that this will take 12 hours or more to charge a 40kWh Nissan Leaf, or 18 hours for a Hyundai Kona or Kia e-Niro, that seems anything but fast to me.

I don’t even believe the standard 7kW home wallbox, which will halve those charge times, should be dubbed ‘fast’. A six to eight-hour charge certainly doesn’t feel fast to a motorist used to brimming a tank of petrol in three minutes to achieve the next 400 miles of range. I tend to think that every level of charging station should be called slow until you get to 50kW DC charging, which will deliver 100 miles of range in some 40 minutes and is typically what you find in most motorway services.

Re-classifying anything from 50kW up to and including 100kW (the latter of which will deliver 100 miles of range in 20 minutes) as fast charging would mean people understanding it's the sort of charge that’s useful on a motorway slog. As opposed to slow charging, which is only for overnight, at work or for a free top-up while you shop or go to the gym. 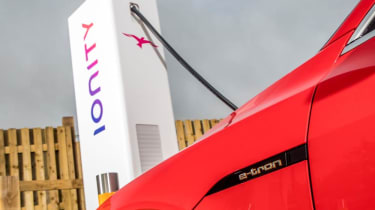 That leaves the Tesla Supercharger network and any other chargers of 120kW and up to be called 'rapid'. You could even re-name the Ionity 350kW chargers – the fastest chargers in the UK – as 'ultra-rapid'. Or maybe 'super-rapid' has a more appealing Marvel hero ring to it.

Then it's simple: Slow is for non-essential or at-home charging, fast is for more laid-back motorway trips and ultra-rapid wears its pants on the outside and keeps you going when you’re in a long-distance rush. Makes more sense to me, and as the charging infrastructure evolves to include far more 100 and 150kW chargers, the language should be evolving to fit. Ultimately, my mutterings here aren’t going to change the misleading charger classifications that are now rather ingrained into the utilities and vehicle manufacturer industries. While DrivingElectric strives to use ordinary language to explain and demystify charging details, in this period of transition in the motoring world, having a self-explanatory, universal language for charging speeds would be a simple step to making electric cars easier to understand.