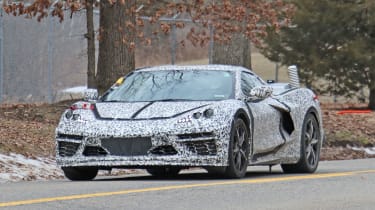 Spy photographers have captured what could be a plug-in hybrid (PHEV) version of the new mid-engined Chevrolet Corvette C8 sports car on test wearing camouflage.

The car has been spotted twice, once in snowy conditions and once in milder weather on home soil in the US, and both sets of pictures show the car covered up with camouflage.

From the front, it looks normal, aside from a selection of red buttons and kill switches on the wing – likely for the front electric motors. The same is true of the car in profile, with no obvious changes for this hybrid version; the car’s sleek profile remains intact.

However, at the rear, the Corvette hybrid looks to be running some kind of emissions hardware. We expect this is to test the efficiency of the hybrid system; a complex set-up of sensors designed to accurately measure how the electric arrangement works under various real-world driving conditions.

The standard petrol Corvette is rear-wheel drive, but the placement of the kill switches on the wing would suggest the PHEV version is going to run electric motors powering the front wheels. That would give the hybrid Corvette four-wheel drive – improving power, performance and grip.

Although there has been no official confirmation of a plug-in Corvette just yet, veteran GM executive Bob Lutz speculated as long ago as 2016 that this generation of the car would use an electrified powertrain for the first time.

At the time, Lutz expected a 5kWh battery to be used, for a zero-emissions range of only 10-15 miles – but the final specification could be different. A V6, rather than the Corvette's traditional V8, could make up the internal-combustion part of the plug-in Corvette's drivetrain. 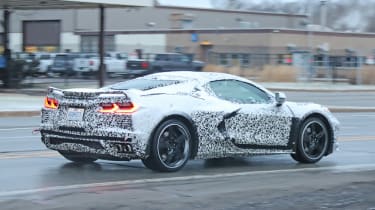 It's likely that – as we've seen with hybrid hypercars from Ferrari, Porsche and McLaren – the addition of hybrid power to the Corvette would primarily be for performance-boosting reasons, rather than aiming at rock-bottom running costs.

The C8 is already a revolution in Corvette terms, as it broke with the model's traditional front-engined layout for the first time in its history, which stretches back to the original C1 Corvette of 1953. The addition of hybrid power could also see four-wheel drive feature on a production Corvette for the first time.

There's no further information on the forthcoming Corvette C8 hybrid. The car is likely to make its debut in early 2021, with sales starting in the US later that year. Expect the hybrid model to cost slightly more than the V8 model, which currently starts at around $60,000 (£51,600). There's no current indication that this model would be sold officially in the UK.

Another classic American sports car – the Ford Mustang – is also expected to go hybrid in the near future, while also lending its name to recently revealed Mustang Mach-E electric SUV.