You lose some storage space to the X3 hybrid's batteries, but this is still a practical family SUV 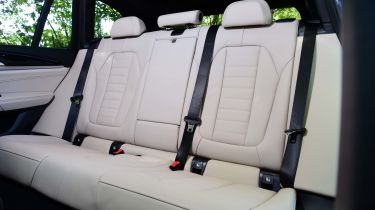 Selecting a plug-in hybrid version of an SUV that's also offered with conventional internal-combustion power usually means sacrificing a bit of space, and that's the case here. Still, given that the X3 is a practical car to begin with, there's not too much to worry about.

Boot space is affected by the hybrid system's batteries, but passenger space is not – there's still plenty of room for occupants in the rear, while those up front will be happy, too. Practical touches like 40:20:40 split-folding seats help maximise versatility, while big windows mean the car's interior feels pretty airy.

The interior is as impressive as in any other X3, with a smart layout, faultless build quality and class-leading infotainment technology. Space isn't in short supply, either, whether you're in the front or back. Extra storage can be added with the Extended Storage Package in conjunction with the Comfort Package. This adds a sunglasses pocket, a lockable glovebox and lashing rails in the boot, among other practical features. 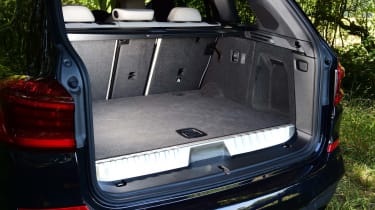 As with most cars of this ilk, the hybrid system in the X3 has more of an impact on practicality: boot space is 100 litres down on non-plug-in X3s, to 450 litres, while there's also an awkward 'step up' in the boot floor (although the boot itself is well shaped) and nowhere specific to keep your charging cables. There's a solid 1,500 litres of space with the seats folded down, however.