Running costs are likely to be low for the BMW 7 Series hybrid, but insurance and company-car tax will be pricey 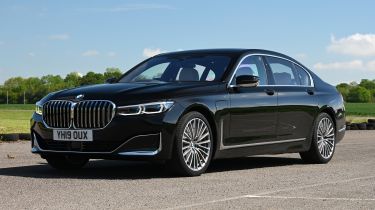 For a car like the BMW 7 Series Hybrid, priced at nearly £80,000, you’d be forgiven for thinking that running costs wouldn’t be at the forefront of most buyers’ minds.

However, the 745e is likely to be popular with chauffeuring companies, so its fuel efficiency really does matter. Officially returning up to around 140mpg in short-wheelbase form, the 745e looks great on paper. However, realising that figure in the real world relies on charging regularly to maximise electric range.

Topping up the 12kWh battery using a home wallbox is likely to cost just a pound or two, assuming your electricity provider is charging you around 14p per kilowatt-hour. So if you mostly do short-distance trips, you could run the 7 Series hybrid for a fraction of the cost of a non-plug-in-hybrid alternative.

For company-car users, Benefit-in-Kind rates for the 745e stand at 12% for 2020/21; the 745Le, with its slightly higher emissions, attracts slightly higher rates. However, both emit a lot less on paper than the petrol and diesel versions of the car.

The BMW 7 Series hybrid sits in insurance group 50, which is the highest possible category. This means it'll likely be very expensive to insure.

Buyers of the 745e get a three-year warranty from BMW, with unlimited mileage allowed in that time. This is the same deal offered to Mercedes S-Class hybrid customers.

BMW says you should have the 7 Series hybrid serviced every two years or 18,000 miles, whichever comes first. Mercedes S-Class hybrid drivers need to book in their cars more regularly, at intervals of one year or 15,500 miles.

As this is an ‘alternatively fuelled vehicle’, Vehicle Excise Duty – colloquially known as road tax – costs £465 for both the short and long-wheelbase versions, which includes an annual supplement of £325 applied to all cars with a list price greater than £40,000 the first five times their tax is renewed. Thereafter, road tax costs £140 annually.