It's good-looking, efficient and technologically advanced, but the Audi A7 TFSIe isn't quite impressive enough to justify its pretty high price tag 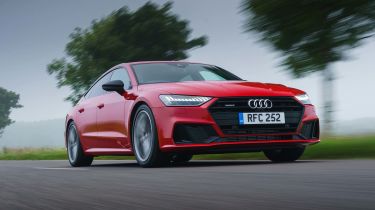 Audi is on a plug-in hybrid charge at the moment. Hot on the heels of the Q5 TFSIe, a trio of other PHEV models are about to join the range, including the larger Q7 SUV and the A8 limousine. Then there's this A7 four-door coupe, which will shortly be followed by more conventional A6 four-door saloon sister and five-door Avant estate models.

As with the Q5, two variations of the Audi plug-in hybrid drivetrain are being offered here: the 55 TFSIe, with 362bhp, and the 50 TFSIe, with 295bhp. In both cases, the same electric motor and 14.1kWh battery feature – only the power output of the four-cylinder turbocharged petrol engine changes.

The 55's healthy power output gives it a 0-62mph time of 5.6 seconds (which is quick, but not as quick as the Volvo S90 T8's 4.8 seconds) and a top speed of 155mph. Despite those impressive on-paper numbers, however, the plug-in A7 isn't quite as effortlessly fast as the equivalent powerful diesel-engined A7s; it's still a four-cylinder engine, after all, which sounds strained rather than characterful when pushed hard.

The dual-clutch automatic gearbox can also be a little jerky at times, while the steering, although nicely weighted, isn't really communicative enough to satisfy a keen driver. In deference to the A7's sporty character, ride quality isn't pillow-soft, and the larger the alloy-wheel size you pick, the worse it will be.

A maximum electric range of about 26 miles is promised, with 15-20 miles easily achievable under normal mixed driving conditions, including a bit of motorway running. Make full use of that range and the car will start to approach the official 149mpg fuel economy figure.

Elsewhere, CO2 emissions of 44g/km ensure low company-car tax and exemption from the London Congestion Charge (albeit only until October 2021). The car itself can help you run as efficiently as possible, with sat-nav route data informing its decisions on whether to run in petrol-electric or pure-electric mode.

The A7's interior is a nice place to spend that electric commute, too: all the modern Audi interior hallmarks are here, including the Virtual Cockpit dials and information screen ahead of the driver, large touchscreen controls, rock-solid build quality and premium-feeling materials throughout.

Overall, the A7 Sportback will be well suited to those who need to prioritise running costs and tax bands when making their purchasing decision. Others, though, will find the six-cylinder hybrid drivetrain in the larger Audi Q7 or Audi A8 – or even just a petrol or diesel-engined A7 – a more appealing prospect.

Audi A7 hybrid: plug-in version to premiere at Frankfurt 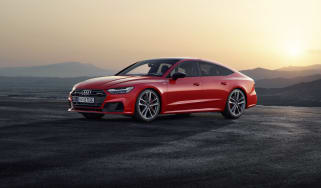 Audi A7 hybrid: plug-in version to premiere at Frankfurt

A7 55 TFSI e quattro gets 367hp, 25 miles of electric-only range and four-wheel drive
Skip to ContentSkip to Footer