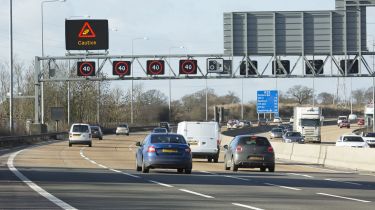 Speed limits. They’re a fact of life. We could debate the pros and cons of speed limits all day but, whether we agree with them or not, they play an important role in road safety and help to reduce the amount of accidents on our roads.

The speed-limit sign is one of the first things we learn as new drivers. That all-too-familiar white circle, bordered in red and with a black number. These cover 20mph, 30mph, 40mph, 50mph and sometimes 60mph. There’s also the national speed limit sign: a white circle with a black diagonal line through it. This means the national speed limit applies, which is 60mph on a single carriageway and 70mph on motorways and dual-carriageways.

Then there are variable limits on smart motorways and temporary speed restrictions when roadworks are in place. Different speed limits also apply to different vehicles, such as if you’re towing a caravan or driving a lorry. This guide to the different speed limits by type of vehicle should help you stick to these basic laws of the road.

Here are the UK’s current national speed limits. We've listed the different types of vehicle and the corresponding speed limits for each type of road.

UK speed limits for a car, van or motorbike towing a trailer:

UK speed limits for buses, coaches and minibuses up to 12 metres long and goods vehicles weighing up to 7.5 tonnes:

UK speed limits for goods vehicles over 7.5 tonnes in England and Wales:

UK speed limits for goods vehicles over 7.5 tonnes in Scotland: 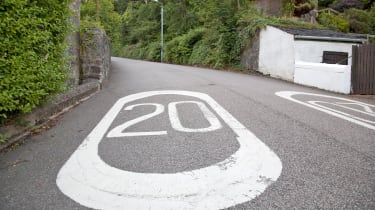 What are 'restricted roads'?

Roads in built-up areas are known as ‘restricted roads’. In the hubbub of these busy areas, it can often be difficult to work out what the speed limit is, especially if you can’t see a speed-limit sign.

As a rule of thumb, if there are streetlights, the speed limit is 30mph. If the speed limit is different, then the speed-limit sign will be shown at regular intervals along that road. In London especially, inner-city areas often have a 20mph speed limit, but these are always signalled by a 20mph sign.

A single-carriageway road doesn’t have a barrier separating the two opposing lanes of traffic, but they aren’t always made up of single lanes. Dual-carriageways and motorways are divided by a barrier such as Armco or a grass verge down the middle. There are restrictions on the types of vehicles that can drive on motorways due to their higher speeds. The slowest forms of transport, such as mopeds, are banned from using them.

Are there minimum speed limits?

Very rarely, you might come across a round, blue sign with a number in it. This is a minimum speed and it means you must not go below this speed. They're usually found in tunnels where slow-moving traffic can be a hazard and a cause of increased pollution.

Are some vehicles speed limited?

While certain types of vehicles such as vans, buses and lorries have different speed limits, many commercial vehicles now must have a speed limiter fitted to prevent them exceeding the limit. Below is a list of the classes that need speed limiters, and the maximum speed they must be set to.

Today’s speed limits were set under the 1984 Road Traffic Act. The last set of changes in regulation occurred in 2015, when the limits for large HGVs on single and dual-carriageways were raised to 50 and 60mph respectively.

Speed limits in the UK are enforced by the police and speed cameras, which can issue penalties for speeding. See our guide to UK speeding fines for more details.