UK speed cameras: all you need to know

From the different types of camera to how they work, this is the DrivingElectric guide to UK speed cameras 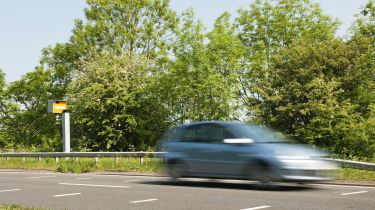 Whatever your opinion on speed cameras, they’re a fixture on UK roads. But understanding all the different types and how to spot them can be a minefield, especially as newer cameras are digital and more sophisticated than ever before.

Since its introduction in 1991, the speed camera has evolved from a box with a camera and rolls of film to live cameras that can record 24/7. The newer breed of cameras can also capture average speeds, traffic-light infringements and people making illegal turns.

You used to be able to tell you’d been caught speeding by the familiar double flash from behind, or you could spot a mobile camera unit in enough time to slow down. Nowadays, by the time you’ve spotted a camera, it could well be too late. 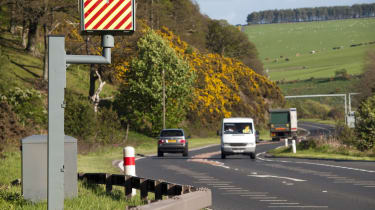 There are more than a dozen different types of speed camera in the UK, enforcing the country's speed limits in various ways. Here’s a rundown of the most common types you’re likely to find on the road.

The Gatso is the oldest type of speed camera – and also one of the most common on UK roads. It’s a rear-facing unit. This means it captures cars, motorbikes, vans and trucks that pass it. They should be easy to spot, as they have to be painted yellow by law (in Scotland, they’re yellow with a red stripe). But we’ve seen Gatsos obscured by overgrown hedges and road signs.

They’re normally located at the side of the road, but you can find them on motorway overhead gantries and in mobile units. Gatsos use radar to measure a vehicle’s speed and take a picture of the rear of the vehicle. By law, there needs to be secondary proof of the offence, which is why there’s always a series of lines painted on the road just ahead of the Gatso. As the car passes, the Gatso takes two photos in quick succession and uses these to measure the speed travelled between two points.

Gatsos can only catch vehicles travelling in the direction they’re pointing. While early Gatso cameras used film, which often ran out, the new breed of cameras can record 24/7 and send the images straight to a control centre.

The next most common type of camera on the road is Truvelo. It looks similar to Gatso, as it’s painted yellow and sits on a pole at the side of the road, but has one crucial difference – it’s forward-facing. That means it catches speeding vehicles approaching it. The Truvelo is smaller than the Gatso and slightly harder to spot.

Sensors in the road activate the Truvelo camera and, as with a Gatso, photographic evidence is required, so small white squares are painted on the road to act as secondary evidence. Recently, the Truvelo has evolved into the Truvelo D-Cam – a digital version that can be front or rear-facing. It can also be used at traffic lights and can monitor multiple lanes at once.

HADECS 3 is short for Highways Agency Digital Enforcement Camera System 3, the name of the speed-camera system used on ‘smart motorways’ in the UK. The cameras come in two small units that are mounted on the side of motorway gantries. They’re about half the size of a Gatso or Truvelo camera, and they don’t use as much fluorescent yellow in their design, so they’re much harder to spot, especially at motorway speeds.

Like other speed cameras, HADECS 3 are accompanied by lines painted on the road that are used as secondary proof of speeding. Like Gatsos, they’re rear-facing radar cameras, and flash when they capture a speeding vehicle. Cleverly, HADECS 3 can adjust to match the variable speed limit in place at the time by using real-time information from sensors along the carriageway. It can also monitor five motorway lanes at once, and spot cars using closed motorway lanes.

SPECS is a camera system that measures a vehicle’s average speed over a set distance. This can be as little as 200 yards or 99 miles. You’ll often see these in use on sections of motorway roadworks; they work at a far greater distance than a Gatso or Truvelo camera. SPECS cameras come in pairs and work with Automatic Number Plate Recognition (ANPR) technology to record your entry and exit time.

The first camera logs your vehicle with a time and date stamp. When your vehicle passes the second camera, the time stamps are compared to work out the time it has taken you to travel between these two points. If your time is quicker than it would have taken travelling at the prescribed speed limit, you’ll get a fine. It’s a myth that switching lanes fools these cameras, and slowing for the cameras and speeding up again doesn’t work, either. 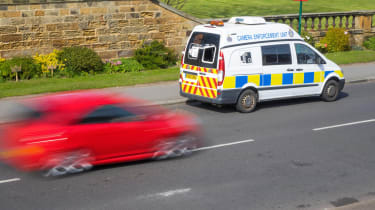 We’ve all seen that suspicious-looking van parked in a lay-by or on a motorway bridge. Mobile speed cameras are a common sight on UK roads and, unlike the other cameras mentioned, they can come as a surprise. especially if it’s a road you’re familiar with. Mobile cameras are usually located in vans that should have a bright livery and be marked as a safety-camera vehicle. They have windows or panels at the front and side that open to allow the operator to see approaching vehicles.

The cameras used in mobile vans are varied, from mini Gatsos to hand-held radar or laser guns. The most sophisticated can catch speeding vehicles up to two miles away. A laser gun, for instance, uses a narrow beam that’s reflected off a vehicle to record its speed – and these devices are very quick and accurate up to a mile away. A radar gun works similarly, but uses a wider beam and can only catch speeders at a distance of up to 300 yards.

Mobile camera vans can be set up to catch vehicles either approaching or moving away from them and they’re usually in areas with a history of crashes or speeding, but they must be parked legally and display signs to make motorists aware of their presence. On motorways, for instance, this can be in the form of fixed speed-camera signs, but it can also be a temporary sign placed at the side of the road. The camera is operated either by a police officer or a certified camera operator associated with a local speed-camera partnership.

Gatsos, Truvelos, SPECS and HADECS 3 are the cameras you’re most likely to encounter on the road. There are also cameras for monitoring traffic, catching vehicles jumping red lights, and checking for tax and insurance dodgers. While it’s good to be aware of the different types of speed camera out there, the best advice is to know the speed limit for the road you’re travelling on and stick to it.

How to tell if a speed camera caught you

The flash of a Gatso or Truvelo is a pretty surefire way of telling you you’ve been caught, but not all cameras flash, so the only way you’ll find out is when you get a Notice of Intended Prosecution (NIP) through the letterbox. This goes to the vehicle’s registered keeper and has to be sent within 14 days of the offence taking place. The registered keeper then has 28 days to inform the DVLA of who the speeding driver was.

The minimum fine for speeding is £100 and three points on your licence, but as of 2017, the maximum fine went up to £1,000 (or £2,500 for speeding on the motorway). The amount you pay and the number of points you could get will depend on how fast you were going and how much you earn, as the fine is based on a percentage of your weekly income. You may be lucky to be offered a speed-awareness course instead if your licence is clean. If you complete this course, your licence won’t be endorsed with penalty points.

See our guide to UK speeding fines for full details.