The first fully electric Toyota has been revealed, but the C-HR EV will only be sold in China 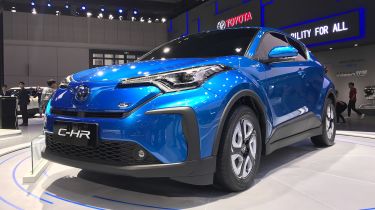 Toyota has revealed an all-electric version of its C-HR SUV at the Shanghai Motor Show, however the company says the car will only be sold in China.

Announced last year at the Beijing Motor Show, the C-HR EV is the first fully electric car to be launched on the Toyota New Global Architecture platform, which also underpins the petrol and hybrid versions of the C-HR, plus family cars like the Corolla and Prius.

However, range and performance figures have not yet been revealed.

The only confirmed changes are those visible on the exterior: the C-HR EV has been restyled at the front to make it stand out, as well as to reflect the fact that its electric powertrain needs less cooling than an internal-combustion engine.

Toyota says the C-HR EV will play a big part in its plans for the Chinese market, where electric car sales are rising rapidly.

Regulations in China incentivise manufacturers to deliver a certain percentage of electrified range, boosting their appeal to carmakers and customers.

The Toyota C-HR EV will be built in China, with batteries sourced from local suppliers.

It’s set to be sold in two forms: Guangzhou-Toyota will retain the C-HR EV name, while FAW-Toyota will rebadge it as the Izoa EV.

At this stage, the Toyota is adamant it has no plans to sell the car globally. The company believes demand in Europe is greater for hybrid cars, and that it'll reach its CO2 emissions targets without going fully electric.

However, it has also indicated that any future electric Toyota that arrives in Europe will likely be a bespoke vehicle, as opposed to one adapted for both internal-combustion and electric powertrains.