The Superb iV plug-in hybrid is generally good here, but we’d like lane-keeping assistance and traffic-sign recognition included as standard 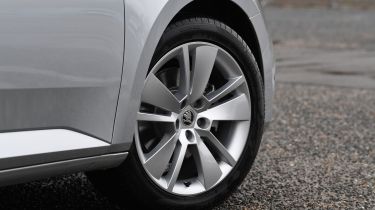 The Skoda Superb hasn’t been crash-tested by Euro NCAP since 2015 when it was launched, and the test has become more stringent since then, so it’s not fair to compare the Skoda’s results with those of cars tested more recently. Even so, it scored well and with the 2019 facelift and introduction of the iV plug-in hybrid, more safety equipment has been included as standard, so there’s no doubting that this remains a very safe car.

Skoda's iV plug-in hybrid powertrain hasn’t been around for long enough to generate usable reliability data, but Skoda fared very well in the 2020 Driver Power survey, coming fifth overall as a brand. The Superb itself finished a very impressive 10th in the list of the top 75 new cars – with owners praising the reliability and build quality, as well as its practicality, comfort and running costs.

All the parts in the Superb iV have been used individually in plenty of Volkswagen Group cars, too, so while the powertrain as a whole is a new prospect, the components have all been tried and tested.

The Skoda Superb gets an alarm and immobiliser, autonomous emergency braking, adaptive cruise control, a driver fatigue sensor, front and rear parking sensors, seven airbags including a driver’s knee airbag, and the usual array of traction-control systems as standard.

However, you have to pay £515 for lane-keeping assistance and blind-spot monitoring on all but the L&K model, and traffic-sign recognition is a £90 option on all models, which is a shame as this is safety technology that many cheaper cars get as standard these days. In terms of these advanced driver aids, the Superb's Volkswagen Passat GTE sister model is usefully better equipped as standard, since it gets a semi-autonomous mode that the Skoda misses out on. Still, you do get matrix LED headlights as standard on the Superb, which is a fantastic safety feature for night-time driving. They automatically deliver very bright, high-beam light for the driver, while shielding oncoming traffic from dazzling glare. They’re a fantastic standard feature; one of those pieces of equipment that you think you really don’t need, but if you’ve got it, you won’t ever want to go back to standard headlights.