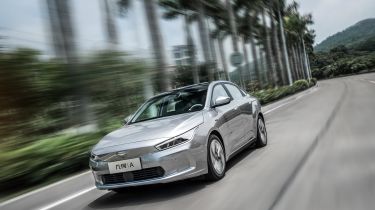 Chinese company Geely is becoming a major global player in the electric-car industry. It owns Volvo (and therefore Polestar), as well as Lotus (which is planning its own electric supercar) and the makers of the electric London Taxi.

It's also working with Mercedes as the latter’s Smart city-car brand transitions to an electric-only, Chinese-manufactured concern.

But as well as all this, Geely has created a dedicated global electric-car sub-brand, known as Geometry. Its first car is called the Geometry A, and we've been behind the wheel for a test drive on the roads of its native China.

The brand launched in China in April and sales in the UK and Europe are expected in due course. The Geometry A sits on purpose-built electric-car underpinnings, although from the outside it looks similar to the internal-combustion-engined Geely Emgrand GL saloon.

The A is the first of 10 Geometry models due by 2025, with SUVs, crossovers, MPVs and family saloons being developed. All of them will be electric, and follow the alphabetic naming structure started by the A.

Geometry is targeting the Tesla Model 3 with the A, but it should be a good deal more affordable than its American rival. As you’d expect from an electric car, the A is very aerodynamically efficient, but is also relatively light at 1,650kg. As standard, it comes with a 51.9kWh battery, giving a 255-mile range, while a higher-capacity battery (61.9kWh) boosts that to 311 miles.

The caveat to those impressive-sounding range figures is that they were calculated using the now-discontinued NEDC testing method; the A hasn't yet gone through the more representative WLTP process, which would probably throw up something closer to 200 and 250 miles respectively for the two battery sizes.

Inside, the design is generally up-to-date and clutter-free, with a large touchscreen taking up most of the dashboard and a head-up display ensuring you won't often need to take your eyes off the road to read the instruments. 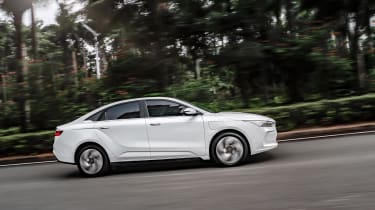 Voice control can also be used to operate the on-board systems, although when we were in the car, it misheard an instruction to adjust the climate control as a request for a weather report.

In places the car's quality leaves something to be desired: the power-opening glovebox is noisy and jerky in operation, while the plastics are quite hard and scratchy. The A is also far from the most spacious car of this size, with head and legroom tight in the back seats. However, boot space is more generous.

In terms of performance, the A can't live with a Tesla Model 3, but it's nonetheless quite lively from a standing start, as we've come to expect from most electric cars. It also employs regenerative braking to send otherwise-wasted energy back into the battery, with Eco and Sport modes adjusting the strength of this effect and therefore the amount of energy recovered.

Driver assistance is present in the form of lane-keeping and active cruise control systems, but they're a little bit jerky and seem to be making tiny adjustments all the time while you're driving, which isn't very confidence-inspiring.

Nonetheless, the Geometry A offers a decent amount of equipment for the money and is competitive in terms of range, performance and charging speeds with more established electric-car competitors. If Geely can improve the interior quality ahead of putting the car on sale in Europe, it could be very tempting proposition.