Nissan has revealed a concept camper that uses batteries recycled from its first generation of electric vehicles, ensuring a “sustainable second life” for used cells.

Old batteries are recycled to make Nissan’s new Energy ROAM power pack, a portable, weatherproof unit with 700Wh of capacity and an output of 1kW.

The company says it'll provide up to seven days’ worth of power to use when camping in the x OPUS concept, which consists of a Nissan Qashqai SUV pulling an AIR OPUS trailer.

Nissan believes the Energy ROAM power pack is a clean alternative to fossil-fuel generators often used by campers, and a solar panel attachment provides a full, zero-emissions charge in 2-4 hours.

If required, the pack can be removed from its housing altogether and charged in an hour via a 230V household socket.

“The Nissan x OPUS concept is a real-world example of how Nissan Energy ROAM can integrate into our lifestyles – in this case, the hugely popular leisure activity of camping,” said Francisco Carranza, managing director, Nissan Energy.

He added: “The new Nissan Energy ROAM can deliver clean, sustainable power to the most remote of locations, and be enjoyed by everyone.”

Using energy from the recycled power pack, the x OPUS can be inflated in as little as 90 seconds. Inside you’ll find a seating and dining area, plus sleeping space for up to six people. 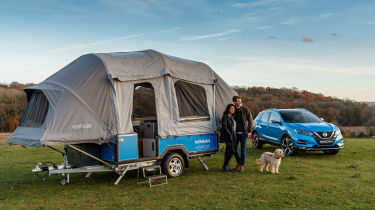 Smartphones can be charged using USB sockets inside, and the camper also has a 4G WiFi hotspot. LED lighting is housed in the canopy, and a digital projector lets campers screen films and television shows.

Cooking facilities include a microwave, two gas hobs and a fridge.

The Nissan x OPUS concept will make its public debut this week at the Camping, Caravan and Motorhome Show in Birmingham.

The AIR OPUS trailer range starts from £15,995. The Nissan Energy ROAM power pack will go on sale in Europe later this year, although prices have yet to be announced. 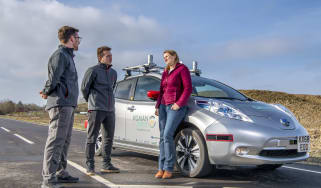