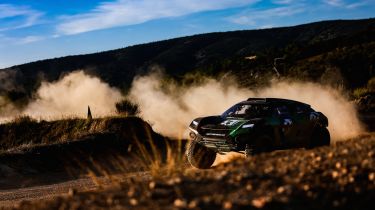 The Extreme E off-road racing series for electric vehicles – a new venture from Formula E founder Alejandro Agag – has revealed the calendar for its inaugural season, beginning in January 2021.

Extreme E aims to visit locations that are suffering the effects of climate change and human activity, in order to promote sustainability and electric vehicles. The first round is from 22-24 January in Dakar, Senegal; the series then moves to Saudi Arabia from 4-6 March and the Mustang District of Nepal from 6-8 May. Next up is Greenland on 27-29 August and the series concludes in the Brazilian rainforest on 29-31 October.

Earlier in 2019, FIA World Rallycross frontrunners Timmy Hansen got behind the wheel of the series' ODYSSEY 21 car for test runs at the Chateau de Lastours testing venue near Carcassonne in the south of France. Speaking about his first experience in the car, Timmy Hansen said: "As early as lap two I was able to push. The car felt nimble, agile and responsive – it definitely didn’t feel its size.

It drifted as you’d want a four-wheel drive car to do then it pulls and recovers nicely when you apply the throttle. I already feel comfortable in the driver’s seat. It has incredibly good driveability compared to a rallycross car. The throttle responds instantly. You get the response you want, which you can’t get from a combustion engine with anti-lag devices. It’s instant power when you need it and nothing when you don’t. You can control everything through the pedals."

The ODYSSEY 21 has been developed by Spark Racing Technology (SRT), which also designed the initial Formula E chassis. After being completed at SRT's facility in Tigery, France, it carried out demonstration runs on the Goodwood Festival of Speed hillclimb in July 2019.

Peak power is 550bhp, enough to get the 1,650kg vehicle from 0-62mph in 4.5 seconds on a significant gradient. The car's tubular frame, crash structure, roll cage and Williams Advanced Engineering battery will be common for all entrants.

Teams will be able to develop their own electric motor (as in Formula E) and are also permitted to modify the engine cover, bumpers, side skirts and lights in order to make the car more closely resemble production models. All of the E-SUVs will run Continental off-road tyres.

SRT's technical director Théophile Gouzin said: "Our challenge was to build a car that could face all the variations in surface and terrain that will be thrown its way, which will include gravel, rock, mud, ice, snow, water and sand.

"The ODYSSEY 21 and its performance is going to be very impressive, exceeding the power and torque of World Rally Championship and rally raid cars. The wheels are some 940mm. Wheels that size have never been utilised in anything other than two-wheel-drive racing cars before. 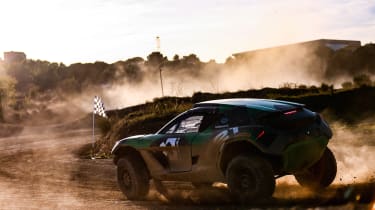 "Using them means we get the benefits of increased traction and traversal ability along with huge suspension travel. The torque and power density from the powertrain is also a breakthrough. We’re getting huge figures from a small package, which means lighter weight, space savings and ultimately improved economy."

Following the conclusion of initial testing, SRT will deliver 12 cars in March 2020 for group testing, while the Extreme E series proper will kick off in January 2021.

Extreme E will use a round-robin format with two groups of six teams. The top four will progress to a knockout stage and each will go head-to-head to earn a place in the final. The off-road stages will be around six to 10 kilometres in length, with a series of virtual 'gates' to be navigated through by drivers.

The championship was launched in London in January 2019 on board the former Royal Mail ship St Helena. The vessel – which retired last year from its longstanding role ferrying supplies to the Atlantic island it's named after – has been purchased by Extreme E and is being turned into a mobile operational base for the series, with all equipment transported by sea rather than by air to reduce carbon emissions.

British adventurer and environmentalist David de Rothschild is the 'Chief Explorer' of Extreme E and will spearhead its mission to raise awareness of issues such as melting ice caps, deforestation, desertification, retreating glaciers, plastic pollution and rising sea levels.