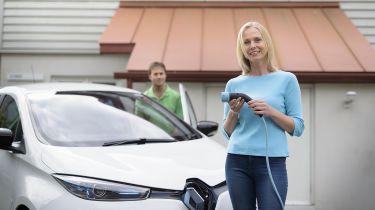 Findings from a trial involving 673 electric and plug-in car drivers have suggested that smart charging can adequately shift demand away from the grid’s peak hours.

The Electric Nation project, which concluded in December last year, analysed 140,000 charging events over the course of 18 months.

It found that on weekdays, the period between 5pm and 7pm was the most popular for charging, with most participants arrived home from work.

Cars were plugged in for an average of 12 hours, although rarely were they charging for the full duration of that time.

Typically drivers of battery-electric vehicles would charge up two or three times per week using a 7kW home wallbox, even with more than 50% charge remaining.

“This shows that most people treat home EV charging as part of their daily routine,” explained Roger Hey, DSO systems and projects manager at Western Power Distribution (WPD), which conducted the study. “If all EVs had to charge at this point it would mean network companies would have to build much larger networks to accommodate the demand.

“But the fact that charging only takes place for some of the time means it’s possible to move charging activity away from peak hours. That means the existing network can accommodate the additional demand, which is good news for reducing the infrastructure costs.”

Over 40 different makes and models featured in the study, including plug-in hybrids and fully electric vehicles with varying battery sizes. The project monitored the users' charging habits to gather data on plug-in behaviour, including frequency, length and amount of energy consumed.

Part of the trial involved simulating ‘Time of Use’ tariffs: most participants opted for the ‘minimise cost’ option on their smart chargers, with the best results emerging from those who could do so remotely using an app.

Experts see smart charging infrastructure as vital to lowering peak demand on the grid, as the technology can automatically charge electric vehicles overnight when demand is lower and electricity is cheaper.

In January, DrivingElectric spoke to National Grid head of innovation Stephen Marland, who told us that the organisation isn't worried about adverse effects of a mass switchover to electric cars.