The Kia Soul was the first electric SUV to hit the streets, and is worth a look for its style and easy-driving practicality 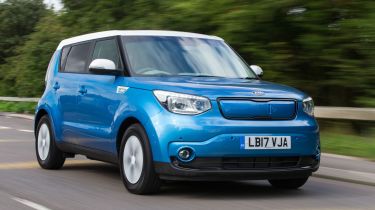 The Kia Soul EV was a bold attempt by the Korean company to inject a bit of style and pizazz into a sector that was in danger of looking a little – shall we say – worthy. Back in 2016 when it went on sale here, it was up against cars such as the last-generation Nissan Leaf, Renault ZOE and Ford Focus Electric, none of which really had the sort of wow factor likely to inspire early-adopting future-tech enthusiasts. Nowadays, with a much improved new Nissan Leaf on the one hand, and more expensive but highly competent rivals such as the BMW i3 and Volkswagen e-Golf on the other, the landscape has changed a little. That’s before we get to the new Hyundai Kona Electric, which is another SUV/crossover that does everything the Soul EV can do – but for a lot longer, thanks to bigger batteries extending its range up to an impressive 312 miles. No wonder Hyundai’s Korean stablemate Kia is working on a next-generation Soul EV using the Kona’s platform, but we're not expecting that new one to hit the streets until 2020. Meanwhile, the current version also has a range of new plug-in hybrid competitors such as the MINI Countryman S E ALL4 and Kia Niro to contend with. The driving range of the Kia Soul EV for sale today looks a little compromised in the light of those recent developments. With a 109bhp motor and only 27kWh of battery life, Kia claims a maximum of just 155 miles. That’s less than half the Kona Electric’s potential range, and to make matters worse the Kona is measured under the newest, more realistic test conditions – unlike the Soul EV, which is measured against an older standard. Still, if you don’t have a requirement for that extra range, the Soul is impressively usable as an urban commuter and cheap as chips to run. One benefit of a small battery is that it doesn’t take more than a few hours to charge, unless you’re limited to a standard domestic supply. The Soul EV comes equipped with both a three-pin AC 230V charging cable and a Type 2 fast-charge cable for use at public charge points or your own domestic wallbox installation

There’s only the one five-door hatchback body, and a single standard trim level. However, Kia makes sure the Soul EV stands out with its blanked-off radiator grille and aerodynamically efficient 16-inch alloy wheel design. Privacy glass and LED daytime running lights and front fog lamps add to the contemporary look. A trio of colour options consist of the suave Titanium Silver, sporty Caribbean Blue with white roof, and White Pearl with Electric Blue roof combo that’s perhaps more suggestive of a domestic electrical appliance. Inside, the Soul EV’s comprehensive specification includes an eight-inch touchscreen with built-in satellite navigation, automatic dual-zone air-conditioning, DAB radio, reversing camera, plus heated seats and steering wheel. That’s a pretty good haul for a car that costs just under £27,000 after the Government plug-in grant is factored in. The electric running gear provides perfectly adequate – even sprightly – performance around town, and the ride and handling are very similar to those of traditional diesel or petrol models. The drive is comfortable and relaxed, although far from exciting. On the motorway, the Soul begins to feel as though it’s running out of steam when you reach the 70mph limit, although a top speed of 90mph is quoted and the car can hold its own with the traffic. Of course, when you’re out of town that less-than-competitive range can weigh on your mind a little, too. 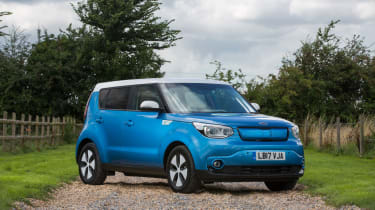 Living with the Soul EV shouldn’t be too much of a hardship otherwise. It has full five-seater practicality and a decently sized boot that loses only around 10% of its volume to the battery pack. It should also be very reliable, and of course comes with the reassurance of Kia’s tremendous seven-year warranty. Whether that’s enough to convince you away from one of the newer breed of electric vehicles with greatly extended range depends on your planned usage. Thanks to its zero-tailpipe-emissions tax advantages, the Soul EV makes plenty of sense for urban company car drivers travelling limited daily distances. Drivers wanting to travel further afield will be better off looking elsewhere. For a more detailed look at the Kia Soul EV, read on for the rest of our in-depth review.