We've lived with the Hyundai Kona Electric for over six months and 5,000 miles, so how does it stack up as a daily driver?

We’re lucky to run long-term test vehicles at DrivingElectric, and we do our best to replicate an ownership experience, but the process still isn’t quite the same as speccing, ordering and paying for your own car. So as our time with the Hyundai Kona Electric draws to a close, we’ve pulled together a bunch of owners to see if their experience matches ours.

This lunchtime gathering in Oxfordshire showcases how diverse electric car buyers now are. About half of our Kona crew are first-time EV customers; some of the others are on their third or fourth zero-emissions vehicle. Plenty of our attendees use their Konas as daily drives, because it’s the only car in their family.

As you might expect from folk ready to give up half a day to talk about their car, the Kona gets a lot of favourable comments. I’m relieved to see most people are matching my real-world range of around 270 miles – although a couple of owners who do the vast majority of their driving around town are knocking on the 300-mile mark.

Nobody feels the need to charge every day, I’m told – which tallies with my own habits. But when they do, they’ve all got home chargers, while some are hooked up to solar panels, too. Of the public charging networks, InstaVolt’s ‘contactless pay’ set-up gets a lot of praise; Ecotricity’s clunky and unreliable Electric Highway isn’t favoured.

Flaws? Nobody mentions the relatively small cabin and boot, to my surprise, but a couple of owners do say that the infotainment system is too slow to respond. I never had that issue, but then I’ve had Android Auto hooked up to it pretty much since the first minute.

It’s interesting to see a few buyers have also found the steering wheel sensor is a bit too quick to react; like them, I’ve grown tired of the Hyundai prompting me to keep my hands on the wheel when they’ve been there all along.

However, one of the longest threads of conversation is on the lack of an app. A simple smartphone tool would allow you to check the car’s range and set up preconditioning for cold mornings from the comfort of your own armchair. I’m in agreement with this, because it seems a curiously low-tech omission from a car that’s full of cutting-edge tricks.

And Hyundai clearly still has work to do on its dealer front, too, because while the Kona Electric was meant to be restricted to online reservations only, many eventual customers walked into their local showroom wanting a conventional purchase process. It’s safe to say that in some cases, the buyer’s level of knowledge about the model and EVs was far beyond that of the sales staff.

For some owners here, such as Richard and Victoria Hurn, the Kona is the latest in a long line of EVs to get heavy use, with tens of thousands of miles already racked up. “It’s an environmental decision but also an economic one,” they say. “Our biggest problem is working out what we’ll switch to when the Kona’s mileage gets really high, really soon. There’s nothing quite like it.”

But for me, it’s Glenn Mason, a studious, rational former BMW X3 owner who now swears he’ll never go back to diesel, who nails the experience. “The Kona,” he says, “is a terrific first electric car. It has more than enough range for most uses, it’s pretty nicely built and there’s lots of equipment. What’s not to like?” I couldn’t agree more. 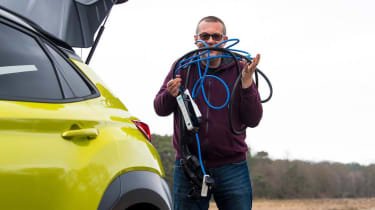 We’ve had our Hyundai Kona Electric for almost six months now, and the question that I’ve been asked about it most frequently is this: “Don’t you worry about range or the lack of a petrol engine?”

The answer, I am happy to report, is no – I’m quite happy to say goodbye to conventional fuel. I simply tell the enquirer that thanks to my Chargemaster home wallbox, I start every day with, in effect, a full tank of petrol – around 270 miles of range, in the Kona’s case. When they hear life with an EV described in those terms, people usually get the point.

This really feels like the first attainable EV that doesn’t force you to make lots of compromises in your daily life. It's a vehicle that fits into your lifestyle, instead of forcing you to adapt to its capabilities – and while other offerings continue to arrive all the time, most notably Kia’s slightly larger e-Niro, I’m not in the least bit surprised to find out that the Kona Electric is already sold out until next year. 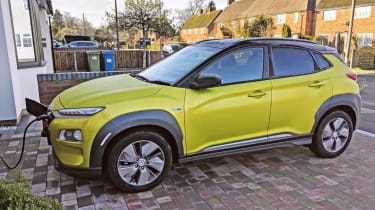 Once you learn to trust the Hyundai’s range predictions, you realise that it’s going to give you around 270 miles on a single charge, even if you hit a stretch of motorway or two. I’ve frequently found myself not bothering to plug my car in at home, because I know it will have enough juice in the 64kWh battery to do the round trip to work the following day regardless.

Only once in the past six months, in fact, have I given in and swapped the Hyundai’s keys for something else from the work car park. I was heading to Wales, and while I was confident I could make it up there on one charge, I was less convinced that the Welsh charging network would be up to giving me enough range to get home again. Chicken? Perhaps. But this sort of decision and journey, and the fact that it’s a one-off, highlight how well our two-car family works with an EV like the Kona.

The vast majority of our trips could be conducted with zero tailpipe emissions (and, thanks to my electricity supplier, on electricity produced from solely renewable sources). We’d only need our petrol family hatchback once in a blue moon; to the point where it would become economically possible (and beneficial) to end its lease and just do short-term rentals when required. 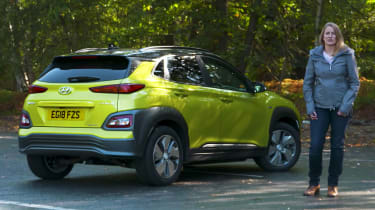 Report 5: Driving conditions and how they impact range

A period of shorter, local journeys has nudged my average consumption closer to the Kona’s official figure of 4.4 miles per kWh, but now I’m back to my usual mix of driving – probably a 50/50 split between motorways and urban roads – the Kona is delivering 4.2 miles per kWh again. 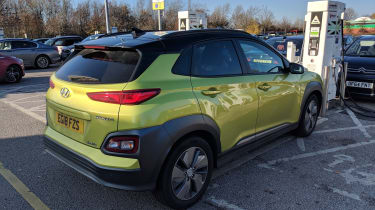 I’m a few months into life with our Hyundai Kona Electric now, and it's performing superbly. Its 64kWh battery continues to give excellent range on a charge, and it has even passed a couple of tests of practicality: a clear-out at the local tip, and a long-distance family run from my home in Berkshire to Liverpool.

Truth be told, I was never going to do the whole run to Merseyside in one hit, even as a challenge. With a five-year-old on board, the days of settling in for a three-hour-plus odyssey without even a toilet break are long gone.

Instead I took the chance to test Ecotricity’s Electric Highway charging network. I’ve had problems with the motorway-service-area-based points before, but to and from Liverpool they worked perfectly, allowing me a comfort break and half an hour of charging at Warwick Services (in both directions), plus some electricity (and a bite to eat) at Lymm in Cheshire on the way up.

The only black mark was a chap in a conventionally powered (and very rental-looking) Hyundai i20, who’d decided to park in one of the EV bays at Warwick South to listen to his music, at full volume. I presume (and hope) that the fine is in the post. 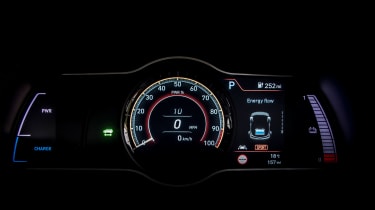 The Kona is currently managing around 250 miles on a full charge, in very British temperatures averaging around five degrees Celsius, with my usual mix of around 50/50 motorway and town driving. As an aside, I never get close to using the full range other than on the odd long journey. With a 7kW home charger, it’s rare I even worry about the car’s range, or where the nearest charging point is. 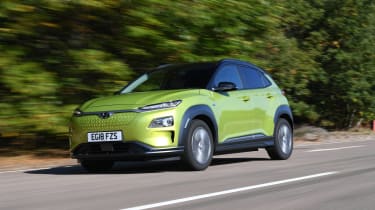 A landmark day! We collected our car from the local dealership, as many customers will, and salesman Michael Dayles talked us through the options Kona customers can choose from – including the vibrant colour palette (our car is in what’s known as Acid Yellow, in case you’re wondering).

He admitted he has noticed a surge in interest in electric cars in recent months. “We’ve had at least one person a day walking in to request information about the Kona Electric,” Michael said. “A few of them have actually been Tesla Model 3 customers who have become frustrated at the delays with that car. We’re able to help, of course, by walking them through the online process. But it does feel like we could be making more of it, if HQ could get stock.

The Kona is already one of our favourite electric cars, and you can read all about why in the full review. When it came to what spec we wanted our car in, we went the same way as the vast majority of the early orders by opting for the more powerful, bigger-battery 64kWh model.

It offers 279 miles of range according to WLTP tests, and while the recent cut in the Plug-In Car Grant and a jump in list price has taken it to well over £32,000 (£35,000 for the Premium SE tested here), that price is still very close to the Kia e-Niro and usefully less than the Nissan Leaf e+.

Finance deals are seriously competitive, too. Buying on Hyundai GB’s 'Click to Buy' website, and with a £5,000 deposit or part-ex value, the monthly cost even for the Premium SE is around £500, with a 10,000-mile annual allowance. That sounds a fair old whack, but you have to factor in how much you’ll save in fuel.

The larger-battery Kona has a capacity of 64kWh, and my home energy tariff (which happily includes electricity sourced entirely from renewable sources) would give a full charge for around £8.50. In contrast, 300 miles in a petrol-powered Kona would cost you around £40, so you could save more than £1,000 a year on fuel alone. Plus, those finance costs are on a par with all of the Kona's key rivals.

We'll be spending a lot of time in our Kona, commuting into London regularly on a fairly typical mix of motorway roads, as well as embarking on long journeys that will rely on public charging points rather than my 7kW home charger, so come back regularly to find out how we're getting on.