The Honda CR-V Hybrid features a high-tech powertrain and the 2.0-litre engine is quiet and capable 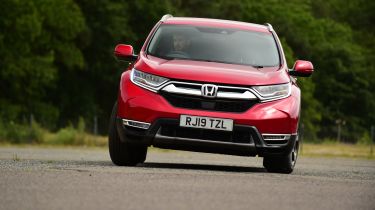 The CR-V Hybrid has a 2.0-litre petrol-electric setup that's capable of driving in three different modes: Hybrid Drive, Engine Drive and EV Drive, switching between them automatically depending on how fast you’re going.

Only in Engine Drive mode do the revs begin to rise, as here the engine turns the wheels directly. In EV Drive, a 1kWh battery powers the electric motor, although its small size means electric-only running is only possible for very short distances.

You also need to drive a reasonable distance to fully recharge the battery. The CR-V Hybrid does this in two ways: by converting excess energy from the engine and by recovering energy produced when slowing down, a process called regenerative braking.

You can adjust the strength of the regenerative braking using paddles either side of the steering wheel: harsher regenerative braking supplies the battery with a greater amount of energy to be redeployed later, while a softer setting allows you to coast further after lifting off the accelerator.

What is very disappointing is the CR-V Hybrid's maximum braked towing capacity of 750kg, which rules it out for anything but a light trailer. For some context, an entry-level Volkswagen Golf will tow 1,300kg, while the Toyota RAV4 Hybrid will tow 1,650kg. A Skoda Kodiaq and plenty of other big diesel 4x4s will tow 2,000kg or more.

Because the engine spends most of its time powering the electric motor generator, it doesn’t rev loudly often. In fact, it’s so quiet that you barely notice the car automatically switching between Hybrid Drive and EV Drive modes on the go. The only time the engine really makes a noise is when you accelerate hard.

The CR-V Hybrid is designed with comfort in mind, so the suspension is tuned to cushion you from the road. It does a good job of absorbing bumps and cracks in the tarmac, although it does wallow about a little in faster direction changes. There's no doubt this is a car designed to keep you calm and relaxed, which it does well thanks to the decent refinement and cushy ride.

Honda's 2021 update for the CR-V brought some improvements to the car's suspension and steering, with a view to improving its handling and comfort. We've yet to put this version to the test.