The Ford Mondeo Estate Hybrid is a reasonably comfortable cruiser, but the CVT gearbox is frustrating 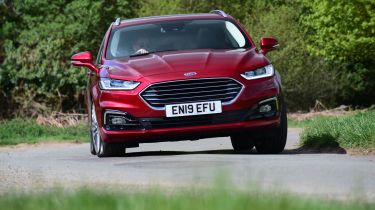 The 2019 update to the Mondeo Hybrid was fairly minor, but Ford did make some improvements to the car's drivetrain, aiming for a smoother driving experience than before. It is better than it was, particularly under braking and when transitioning from petrol to electric power and back again, but under acceleration still has a tendency to be hesitant and jerky.

Claimed performance figures are 9.2 seconds to go from 0-62mph and a top speed of 116mph. The Mondeo Estate Hybrid's on-paper power output of 185bhp seems hefty enough, but it's a fairly weighty car and doesn't feel all that rapid in the real world.

The CVT gearbox is the main culprit here; it's not as good as more up-to-date efforts at the same technology from Toyota and Lexus. As mentioned above, the Mondeo brakes smoothly and transitions from electric to petrol power and back almost imperceptibly, but the issues arise when you ask for a burst of acceleration.

Doing so exposes the limitations of the car's transmission: there's little response if you brush the accelerator lightly, and even pressing it hard to the floor results only in a lot of noise from the four-cylinder engine and a disappointingly sluggish surge of power. Once up to speed, though, the Mondeo is at least a decent motorway cruiser.

The hybrid Mondeo Estate is heavier than the petrol-engined versions but a little lighter than the diesels. In contrast to their predecessors, no version of the current Mondeo boasts what could be called class-leading handling. The car is composed and capable in corners, but does little to excite or engage the driver.