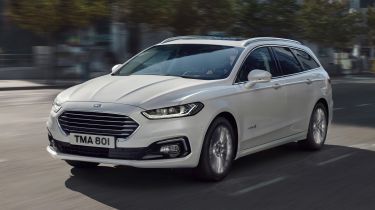 Ford has revealed details of an improved and updated Mondeo Hybrid for 2019, with the petrol-electric car now available as both a saloon and estate for the first time.

Ford promises "an even more refined petrol-electric driving experience" from the new Mondeo Hybrid. Petrol and diesel power continues to be offered in the Mondeo, too, including new 2.0-litre 'EcoBlue' diesels.

Roeland de Waard, Ford's vice-president for European marketing, sales and service, says the company expects the Hybrid to account for up to 50% of the model's sales from now on.

Updates to the Mondeo Hybrid for 2019 are focused on the software that controls its powertrain, with Ford promising smooth and linear power delivery, as well as better use being made of the engine's torque to deliver greater fuel efficiency.

The 2.0-litre petrol-electric setup in both saloon and estate versions of the Mondeo Hybrid produces 184bhp, while the 1.4kWh battery allows for limited pure-electric running for short periods at low speeds.

The car's regenerative braking system is said to capture up to 90% of the energy normally lost during braking to replenish the battery.

Official Mondeo Hybrid economy and emissions figures from the WLTP testing procedure have yet to be released, but Ford says it's targeting 98g/km of CO2 for the saloon and 103g/km for the estate.

The estate offers 403 litres of boot space with the rear seats in place, expanding to 1,508 litres with the seats dropped. This compares to 500 and 1,605 litres respectively for the conventional petrol or diesel-powered Mondeo estate.

As before, Ford will be offering the hybrid power option in the more expensive Titanium Edition and Vignale trim levels of the Mondeo only. The Titanium Edition Hybrid is priced at £28,000 and the Vignale Hybrid at £31,425. In both cases, the estate costs £1,420 more. 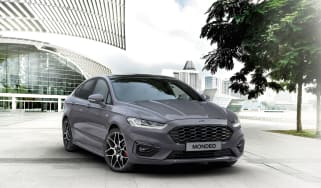