The new BMW iX3 is on sale now, with prices starting from £61,900 for the high-spec Premier Edition 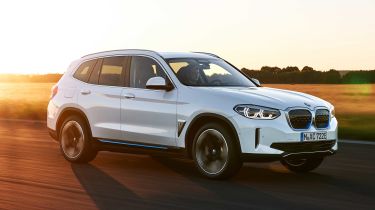 Prices and specs for the new BMW iX3 have been revealed, with the Premier Edition model costing from £61,900. In addition, a Premier Edition Pro will also be available for an extra £3,000 – but as both cost more than £50,000, neither is eligible for the government’s Plug-in Car Grant (PiCG).

Furthermore, Premier Edition Pro customers (from £64,900) get a head-up display, a Harman Kardon stereo, and gesture control for the infotainment. 'Parking Assistant Plus', automatic high beam, and keyless entry and start are also included. The iX3 Premier Edition Pro also boasts an external sound projector developed in collaboration with film score composer Hans Zimmer – designed to alert pedestrians when the car is travelling at slow speeds.

The pure-electric BMW iX3 boasts an 80kWh battery (with 74kWh usable capacity), making it capable of up to 285 miles on a charge. BMW says the lower weight of the iX3’s cells compared to rivals means it can not only charge faster, but will require fewer stops on longer trips.

The BMW iX3 can accept a charge rate of 150kW – the same as an Audi e-tron. This allows customers to recharge the iX3’s batteries from zero to 80% in 34 minutes. It will also charge from a three-phase 11kW home wallbox, though BMW hasn’t revealed how long this will take. 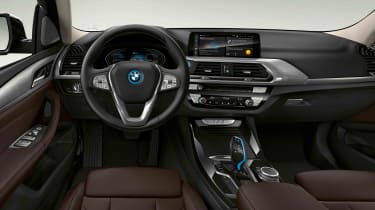 Closely related to the conventional X3, the iX3 gets subtly sculpted body panels and a set of special aerodynamic wheels to aid efficiency – the latter reducing the car’s drag coefficient by around 5%. BMW says this adds up to six miles to the car’s officially calculated driving range.

Using an adapted version of the standard X3’s platform, BMW has positioned the batteries on the floor – lowering the SUV’s centre of gravity by 7.5cm. The addition of this new model means the X3 is the first BMW to be offered with petrol, diesel, plug-in hybrid and electric powertrains.

Using what BMW calls its “fifth-generation eDrive technology”, the iX3’s powertrain will also feature in the forthcoming BMW iNEXT and BMW i4, which are due on sale in 2021. The brand claims the density of the electric motor is “30% greater than that of existing fully electric vehicles within the BMW Group portfolio.”

Developing 282bhp and 400Nm of torque, the iX3 accelerates from 0-62mph in 6.8 seconds, while the car’s top speed is electronically limited to 112mph. The iX3 is rear-wheel drive; no xDrive four-wheel-drive model is planned for the SUV’s launch.

The iX3 features three settings for the regenerative braking system: high, medium or low. In addition, there’s a fourth ‘B’ setting, which engages what BMW claims will deliver “one-pedal” driving with “particularly strong recuperation”.

A further adaptive setup can use data from the sat-nav and driver-assistance sensors to decide how much force to slow the car with. It can reduce the car’s speed for an upcoming junction, for example, or choose to engage the coasting function if the road ahead is clear.

The inside of the new iX3 isn't all that different to the standard petrol and diesel model, albeit with a few subtle changes to mark out the fully-electric version. Most obvious are the “understated blue accents” that feature on the gear lever, steering wheel and start-stop button.

Elsewhere, there's iX3 branding on the centre console and on the door sills. We expect sparingly few changes elsewhere, with similarly plush materials and a high quality finish for the doors and dashboard.

BMW has confirmed that the new iX3 will feature the firm’s latest infotainment operating system, which allows for future over-the-air updates. Every version will get a 12.3-inch digital instrument cluster and a 10.25-inch central display. BMW Intelligent Personal Assistant allows for advanced voice recognition, while the iX3 will be offered not only with Apple CarPlay, but also Android Auto.

The tweaks to the platform and packaging result in a slightly smaller boot, and yet the iX3’s 510-litre load bay sizes up strongly against the petrol model’s 550-litre space. Overall capacity with the rear seats folded drops to 1,560 litres; 40 litres smaller than in a conventional X3. 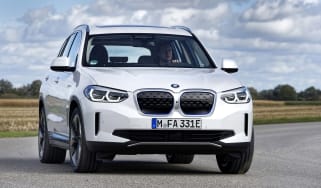