Futuristic-looking and fast plug-in hybrid sports car is very tempting. Here's what to look for when buying used 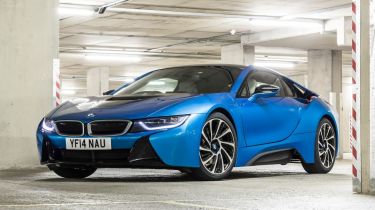 Boasting concept-car looks, advanced plug-in hybrid technology and a fantastic driving experience, the slinky i8 was a towering statement of BMW's intent in the area of electrified cars when it arrived in 2014.

The combination of a lightweight carbon-fibre body with a 1.5-litre turbocharged petrol engine powering the rear wheels and a 129bhp electric motor driving the rears delivered a scintillating driving experience, married to potential fuel economy of over 100mpg and sub-50g/km CO2 emissions.

This really is a 'have your cake and eat it' car – although there's no denying the initial purchase price was very steep and even secondhand it's hardly in bargain-basement territory yet, either.

July 2014 saw the arrival of the i8 Coupe in BMW showrooms, priced at just under £100,000 new. Only one trim level was offered and the battery promised an electric driving range of 23 miles before the engine had to be called on. A home wallbox charger will replenish the car's cells from 0-80% in two hours.

January 2018 brought an update and also saw the open-top Roadster model join the range, with prices swelling to £112,000 and £124,000 respectively. A larger battery pack increased the potential electric range to 33 miles, while the option of hi-tech laser headlights appeared, at the very hefty cost of over £5,000.

Unusually for a BMW, the i8 options list wasn't long, but it was possible for buyers to add a surround-view camera and an upgraded Harmon Kardon stereo system, along with a wide choice of exterior colours and finishes.

The i8 has never really had any direct rivals, but potential buyers may be interested in checking out Honda's mid-engined NSX hybrid supercar. It lacks the BMW's pure-electric running capability, but with not many sold in the UK, is a very rare sight. The fully electric Tesla Model S is another possible choice, but as a four-seater it's not quite as sporty or involving to drive as the i8.

Otherwise you need to look to purely combustion-engined alternatives to match the BMW's driving thrills: these include the Porsche 911, Jaguar F-Type, Aston Martin Vantage and Audi R8, all of which are also available in convertible form like the i8. 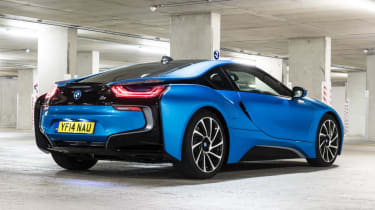 Electric range: It's possible to drive at up to 75mph in zero-emissions electric mode in the i3, but realistic range is going to be in the region of 10-15 miles, rather than the 23 recorded in official testing.

Battery: BMW covered the i8's battery pack with an eight-year warranty and so far we've heard no reports of owners needed to call on this guarantee for a replacement

Headlights: The standard LEDs aren't quite as bright or effective as you might expect, so try a night-time test drive if you can

Doors: Those spectacular 'butterfly' doors need space to open – something to consider if you frequently use busy car parks with tight spaces

The i8's interior is not quite as science-fiction as its exterior, but it's still a very nice design and quality is excellent. It's relatively easy to live with day-to-day, but the back seats are truly tiny and really better off being used as somewhere to throw your bag than squeeze unfortunate passengers into. The boot is also very small.

BMW recommends servicing the i8 every 18,000 miles or two years, with minor services costing around £375 and major services breaking the £1,000 mark. Cars were sold with a five-year maintenance package until early 2018; this was first cut to three years before being dropped altogether for the most recent examples.

The BMW i8 is an engineering tour de force and to this day doesn't really have a direct rival. Like previous BMW supercars such as the M1 and Z8, it could well gain collectible status in the future and therefore could be a good long-term investment.

Up front, it's still quite expensive to buy, and servicing costs are steep, but you'll obviously save on fuel compared to a much thirstier petrol-engined sports car.