Passenger and luggage space are both decent, if not class-leading, in the Toyota RAV4 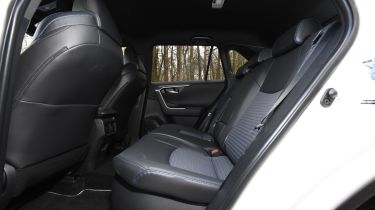 The RAV4 is roomy and comfortable, with loads of space for two lanky teenagers to lounge about in the back, and even a third, middle passenger will be fine for shorter journeys. Still, you can get more sheer carrying capacity for your money in some rivals, as well as seven-seat layouts.

Toyota has increased the distance between the front and rear axles by 30mm compared to the old RAV4 and it pays dividends inside. There's plenty of room for four adults inside, and adding a fifth in the middle rear seat isn't out of the question, either.

There's loads of storage, including a deep centre cubby under the driver's elbow, where you'll find a couple of USB inputs and a useful tray to hold your phone.

There are also various small cubbies dotted around the dashboard that'll be idea for sticking your wallet or loose change, and the glovebox is big enough to take an ice scraper and some screen wipes with no hassle.

The two chunky, fixed cup-holders will also take a big travel mug with no problems. Rear passengers get cup-holders in the centre armrest, map pockets on the back of the front seats and door pockets big enough to take your average drinks bottle.

You get 580 litres of luggage storage with the rear seats in place, which is a 79-litre increase on the old model. Drop the seats down and a total of 1,690 litres is freed up for IKEA expeditions, house clear-outs and Christmas-tree or mountain-bike transport. It's also a decent square-shaped boot with a boot floor that's flush with the boot lip, making it easier to heft big items into the boot.

Those numbers look good in isolation, and the RAV4's broad boot will be great even for very active families, but at this price the Skoda Kodiaq has a usefully bigger boot and also the option of a seven-seat layout should you want it.

There's no underfloor storage but you do get a space saver tyre under there, which – as anyone who's grappled with a tube of gunk to try and repair a puncture will know – is an absolute godsend.