Hybrid drivetrain and CVT gearbox limit ultimate driver appeal, but the Toyota RAV4 rides and handles well for what it is 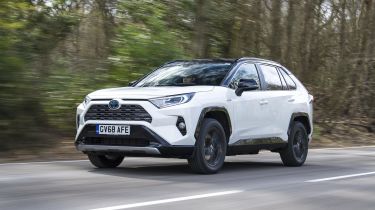 Nobody really expects a family SUV to be the last word in driver involvement, and such is the case with the latest Toyota RAV4. It gives a good account of itself in many areas, though, with responsive steering, a comfortable ride and decent handling for a car of its size. The main drawbacks from the driver's point of view concern the engine and gearbox.

Toyota refers to the RAV4 Hybrid's petrol-electric setup as its 'Dynamic Force' engine. It comprises a 2.5-litre four-cylinder petrol engine plus the electric motor, producing 215bhp in the front-wheel-drive car and 219bhp if you go for four-wheel-drive variant.

Performance is swift enough: 0-62mph takes 8.4 seconds with front-wheel drive and 8.1 seconds with four-wheel drive (thanks to the latter's extra motor on the rear axle). It certainly feels responsive enough to be reassuring even if you need to merge into fast traffic or go for an overtake, and you can even stick it in Sport for heavier steering and sharper throttle response.

Honestly, the RAV4 just isn't a car that warrants or rewards hard driving of any kind. You're better off leaving it in Normal or Eco and just enjoying the calm, relaxing progress.

While the CVT automatic gearbox is an improvement on earlier Toyota efforts, it's still the most frustrating aspect of the car that it allows the coarse, buzzy-sounding engine to rev hard without actually accelerating that quickly.

Predictably, keen drivers won't be overly enamoured with the RAV4, but the rest of us will find it comfortable and responsive. Good suspension design means it doesn't lean as heavily in corners as you might expect a hefty SUV to, and the steering is both nicely weighted and direct. Ride quality is good, too, even on the larger 18-inch wheels.

In four-wheel-drive form, the RAV4 is actually a pretty competent off-roader, and just offering the option of four-wheel drive sets it apart from many front-wheel-drive-only rivals. Of course, a Jeep or Land Rover will be far more accomplished heavy duty off-roaders, but if you live in a location where muddy, slippery or snowy conditions are a regular occurrence, the four-wheel-drive RAV4 is well worth considering.

It's a mediocre tow car, though, as its maximum braked towing capacity of 1,650kg (800kg for the front-wheel-drive car) is well below the circa 2,000-2,500kg offered by many diesel alternatives.