The design inside is uninspiring, but the Toyota RAV4 Hybrid is comfortable and well equipped 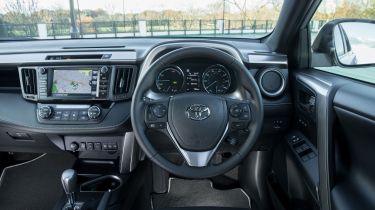 As a comfortable way to cover motorway miles, the RAV4 Hybrid is only really let down by a power system that grows noisy when acceleration is called for. At cruising speed, things settle down, but there's still more noise from the tyres and wind as it passes over the car than in some rivals.

Quietness is more assured when driving around town, especially when travelling in electric mode for the short distances it permits. Unfortunately, the ride is least smooth at lower speeds – in order to accommodate the extra weight of the batteries, the hybrid's suspension is stiffer than that of the petrol RAV4, so potholes can cause the car to shudder.

The RAV4's dashboard is modern and inoffensive to look at, but isn't stylish or inspiring. There's a hooded pod of two analogue instruments ahead of you, a speedometer to the right and an efficiency gauge to the left. The latter takes the place of the petrol car's rev counter, and its needle swings beyond the green 'eco' section whenever you accelerate hard. Apply the brakes and you'll see the needle move into the 'CHG' sector to indicate regenerative braking is topping the battery up.

Between the two dials is a colour display for other driving information such as battery charge level, range and fuel consumption. Elsewhere, the seven-inch Toyota Touch 2 infotainment system is mounted at the top of the centre console, flanked by air vents on either side. The climate controls are immediately below, with a row of buttons for the heated seats, EV mode and other modes below that.

None of the buttons is as neatly designed – or intuitively located – as those in rivals such as the Peugeot 3008. The Toyota seems to be designed more for functionality than pleasure, and this is reflected by the materials used, which are more robust and hard-wearing than tactile or pleasing to look at. There are no concerns about fit and finish, though – the RAV4 is superbly built inside.

The RAV4 Hybrid can be chosen in four trim levels, kicking off with Icon. This entry-level model is quite well equipped in its own right, with 17-inch alloy wheels, automatic headlights and wipers and an automatic tailgate as well as keyless entry and go. Inside, there's a seven-inch Touch 2 infotainment system with DAB radio, Bluetooth connection and music streaming as well as a reversing camera. You also get dual-zone climate control.

Icon Tech adds TomTom navigation to the Touch 2 infotainment system, while Design gives the RAV4 a more distinctive look, with black 18-inch alloy wheels and LED headlamps outside and a black interior in leather and Alcantara suede. It also brings heated front seats and a driver's seat with powered adjustment.

Excel has a look all of its own, thanks to black 18-inch alloy wheels, black door mirror housings and sill covers on the outside, and a leather interior inside. Infotainment is boosted with 3D mapping and voice recognition, while rear cross-traffic sensors and blind-spot assistance become standard.

The functionality of Toyota's Touch 2 infotainment system depends on by trim level. Across the RAV4 range, it brings a seven-inch touchscreen display, DAB radio, Bluetooth connection for phone calls and music streaming, and a reversing camera. From Icon Tech and above it introduces 'GO' navigation, while Excel has voice control, 3D mapping and text-to-speech functions.

By tethering to your smartphone to give access to its data allowance, you can use online apps such as Google Street View and live TomTom traffic, with real-time diversions. Although frequent operations, such as adjusting the volume and placing a phone call, can be performed using the steering-wheel buttons, most of the infotainment system's functions are reliant on the touchscreen, which can be tricky to navigate while on the move. The graphics, though clear and easy to understand, aren't as modern and sophisticated as on rivals like the Volkswagen Tiguan.