If you drive carefully, the Lexus UX is one of the most fuel-efficient SUVs on the market 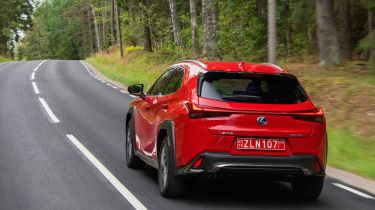 The Lexus UX is based on the hugely successful Toyota Prius – as well as its sister model the Toyota C-HR. But while the platform is the same, the UX uses a more powerful 2.0-litre petrol engine mated to two powerful electric motors.

In our experience, both the Prius and C-HR Hybrid are among the most efficient cars in their respective classes, and while the Lexus UX is relatively new, we’ve no reason to suggest it’ll be anything less than incredibly economical. The Japanese firm has plenty of knowledge with hybrid cars, and while the current MPG and CO2 figures come from the discontinued NEDC testing procedure (results from the new WLTP test will be published in due course), it’s likely the UX will be cheap to run.

As this is a hybrid – rather than a plug-in hybrid – you don’t ever need to connect the Lexus UX 250h to a power socket. The downside of this is a limited low-speed electric range of just a mile or two. If you’re clever, though, you can maximise your cost savings by forcing the car into ‘EV Mode’ when crawling around town. Where conventional petrol and diesel cars would continue to use fuel, the Lexus UX can cruise around completely emission-free.

As such, Lexus claims the front-wheel-drive UX 250h will emit between 96 and 103g/km of CO2 depending on specification and wheel size. The entry-level car is the most efficient, while the racier F-Sport (with bigger wheels) emits a little more CO2. E-Four-badged four-wheel-drive versions are rated between 106 and 114g/km.