Tuning company Brabus reveals sporty version of Smart EQ ForTwo Cabrio, but only 28 will be built 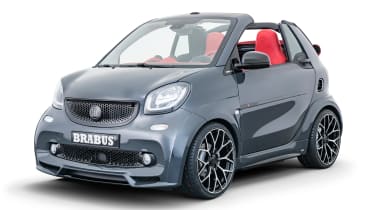 Tuning company Brabus has revealed the Ultimate E Shadow Edition – a sporty version of the Smart EQ ForTwo Cabrio – ahead of the car’s debut at the Geneva Motor Show next week.

The Ultimate Shadow Edition’s electric motor has been uprated from 80 to 91bhp, with a 0-62mph figure of 10.9 seconds and a top speed of 81mph.

Only 28 will be built, although the exclusive production run comes with an eye-watering price tag: the firm is asking customers for €64,900 (approximately £56,000).

Featuring the same 17.6kWh battery as the Smart EQ ForTwo Cabrio, the Brabus has a claimed range of 78 miles on a single charge, with power sent to the rear wheels through a single-speed transmission.

The company says the Ultimate E Shadow Edition is a “pre-eminent eye-catcher” with a ”strikingly styled” wide body, which is finished in gunmetal grey paint and combined with 18-inch forged alloy wheels.

Inside, Brabus boasts of an “outstanding combination of fascinating design, masterful workmanship and meticulous material selection,” including Brabus Mastic leather and Silvertex fabric on the seats.

Further sporty touches can be found on the pedals, gearknob and parking brake, which are made from aluminium.