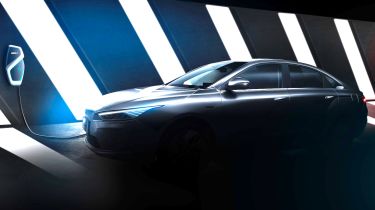 Chinese brand Geely is planning an all-new electric saloon car as part of its push into overseas markets. Thought to be called Geely Emgrand 11, it will be the firm’s second all-electric model, following the launch of the Emgrand EV in 2015.

Geely – the manufacturing giant that owns the Volvo, Lotus, Polestar and Lynk & Co brands – describes the saloon as being a ‘globally developed product’, and from the single teaser image released so far, it appears to be far more attractive than the Emgrand.

The as-yet-unnamed new car will be unveiled in the coming months, with a “focus on design, technology and performance”.

Little can be seen in the teaser image, but Geely says it'll have a “closed frontal design”, a look employed by cars like the Kia e-Niro and latest Tesla Model S that’s increasingly marking out electric cars from their combustion-engined counterparts.

The headlights are designed around the Chinese character for 'one' and incorporate what appears to be a long LED daytime running light. The headlamp units sweep up towards the front wheelarches for a sleek look. The new car is remarkably aerodynamic, aided by features such as Tesla-style pop-out door handles.

No technical details have been revealed, but the Geely saloon is likely to build on the Emgrand EV’s 186-mile range. That model is capable of charging fully in just 48 minutes using a rapid charger.

In 2015, Geely revealed 90% of its sales would come from electric and hybrid vehicles by 2020. In addition to the Emgrand EV, it has a range of hybrid vehicles, including the Bo Rui GR – a model that bears a striking resemblance to the new car.

Although the new saloon will spearhead Geely’s overseas growth, and is likely to come to the Europe, there’s no word on a UK launch just yet.