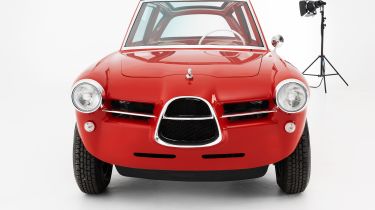 Pre-orders for the Nobe 100 – a "fully recyclable" three-wheel electric car – have opened on crowdfunding site Indiegogo, as the Estonian start-up behind the project seeks funding to kick-start a full production run.

A full charge takes just two hours, although specific charging rates and cable types have not been disclosed.

The company makes several brazen claims about the Nobe 100, including that it’s the first ever all-wheel-drive, three-wheel car and also the "first-ever cabrio" electric vehicle.

Quite what discounts the Smart EQ ForTwo Cabrio or the original Tesla Roadster from that title isn’t clear.

Nobe also claims the 100 is "the first true all terrain electric vehicle". All-wheel drive is certainly a must for capable off-roaders, however it’s usually best applied through four wheels as opposed to three.

Nobe says the 100 takes its design cues from "vintage America". The interior features a built-in espresso machine, as well as seating for three people. 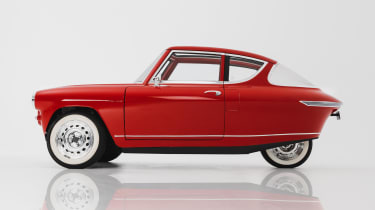 The start-up also says the car can be "parked vertically" using a "gekko" parking rig, saving on road space and improving security.

The Nobe 100 is being pitched as a "fully recyclable vehicle", with upgradeable firmware making it ready for future developments in autonomous driving technology.

The company envisions that the car will "create a secondary market of local manufacturers who construct and personalize vehicles locally", sparking the "creation of a new 'nanofactories' revolution in ex-industrial towns".

Nobe is aiming to raise £79,900 from the crowdfunding campaign. It’s requesting a minimum investment of £16, with incentives ranging from discount guarantees on future models to quirky merchandise: examples given include espresso machines and "neo-vintage" umbrellas.