The Mercedes E-Class plug-in hybrids are powerful, but can feel a bit less dynamic due to their added weight 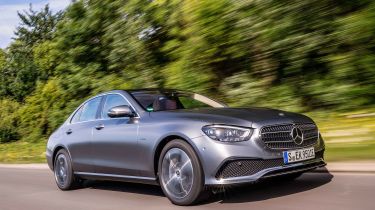 Plug-in hybrids are rarely found wanting when it comes to power, and the E-Class models are no exception, with the E 300 e petrol pumping out 316bhp and the E 300 de diesel just 10bhp less.

They do have to contend with their added weight – they’re each around 300kg heavier than a regular petrol or diesel E-Class – so inevitably end up feeling a little more cumbersome in fast corners and the like, but they still feel quick enough to be exhilaratingly rapid if you want them to be.

Four different hybrid modes allow you to prioritise electric running, save the battery's charge for later, allow the car to work out the best combination for maximum efficiency or simply deploy full power to the detriment of efficiency.

All versions of the E-Class hybrid have their top speed electronically limited to 155mph, and the 0-62mph time doesn't vary hugely across the different versions.

Fastest of the lot is the E 300 e saloon, completing the sprint in 5.7 seconds, which is enough to worry many hot hatchbacks. The diesel is very slightly slower, taking 5.9 seconds to do the same (and a further tenth of a second longer in estate guise).

Suffice to say, the E-Class hybrids are quick enough to deliver properly gutsy performance, but we'd like a more cohesive response when the system is shuffling between pure electric and diesel or petrol power – although this is only really noticeable when you’re pushing on with any kind of enthusiasm. It's not the smoothest or most predictable throttle response given the change in power delivery as the car switches from pure electric to petrol or diesel, and there's occasionally a hesitation in response if the combustion engine is in play, too.

In pure electric mode, however, power delivery is serene and predictable – so it's worth using the car's 'E-Hold' setting if you do a motorway commute that ends in the city. This setting allows you to rely mostly on the combustion engine when it's at its quietest and most efficient – on the motorway – before falling back on pure electric drive for the urban crawl. Brake response, too, could be smoother and more natural-feeling, particularly at town speeds.

Recent Mercedes models have struck a better balance between handling prowess and ride comfort, where their predecessors focused on the latter almost exclusively.

This means the current E-Class is a decent all-rounder, providing very smooth motorway cruising ability along with good body control on twistier back roads. You can add air suspension as an option, but our experience of the E 300 de on its standard steel springs on UK roads suggests that it's not necessary. Even as standard, the E-Class Hybrid cushions its occupants from all but the worst potholes and road scarring.

For all that the E-Class offers a fine balance of comfort and handling, the more precise, lighter-feeling dynamics of the BMW 530e means that it's still the car to go for in this class if driving enjoyment is high up on your list of priorities.

There were no mechanical changes for the E-Class’s mid-life facelift, meaning the newer versions feel identical to drive.